Zelda Wiki
Register
Don't have an account?
Sign In
Advertisement
in: Locations in The Adventure of Link, Dungeons, Palaces,
and 3 more
English 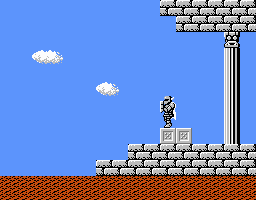 Placement of one of the Crystals

This dungeon is located in northern Hyrule, on the coast of the sprawling Parapa Desert, from which the Palace takes its name.

In comparison to other palaces in The Adventure of Link, Parapa Palace ranks among the smallest, and perhaps the most straightforward. The palace entrance is at ground level, leaving Link to scour the temple's three sub-surface floors for Keys and experience. Wosu, Stalfos, and Bubble enemies are most common, however, few orange Iron Knuckle pose a threat on lower floors. A lone Fairy is positioned on the easternmost room on the first floor; the rest of the temple is devoid of health supplements. Being the first dungeon of the game, it introduces "lifts", or makeshift elevators that transport Link from one floor to the next, a dungeon facet included in every palace of the game. This dungeon does not require the use of any Spells, although Shield is recommended, especially in fighting Mazura.

The Candle is located in the western potion of the palace, while the palace's guardian, Mazura, awaits in the easternmost section of the lowest floor.

The Parapa Palace makes an appearance in the "Quest for the Potion of Power" episode of Captain N: The Game Master. Link, Princess Zelda, and Kevin visit the palace to obtain the Golden Key, which will eventually lead them to find the Potion of Power in the Island Palace. Inside the Parapa Palace, the heroes fight various monsters such as Wosu, Stalfos, and Guma. Eventually, they reach an elevator that takes them to the chamber where the Golden Key is located. Link shatters the glass that was covering the key and a map leading to the Island Palace, causing the room to shake and reveal that Horsehead is the guardian of the golden item.[2] Link and Kevin are successful in defeating Horsehead, and the heroes exit the palace to continue on their search for the Potion of Power.