Zelda Wiki
Register
Don't have an account?
Sign In
Advertisement
in: Items, Future Releases, Items in Breath of the Wild,
and 4 more 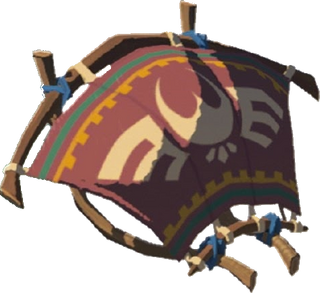 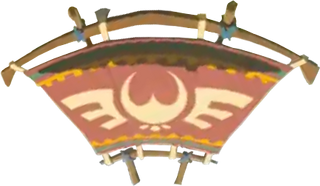 Sailing through the air

The Paraglider is first seen after Link activates the Great Plateau Tower and descends back to the ground. There, he is met by the Old Man, who is investigating the sudden appearance of Sheikah Towers across Hyrule. There, he explains to Link that the Great Plateau that they are on is entirely isolated from the rest of the world, as nobody can safely travel to and from it without a Paraglider such as his own.[3] Upon being asked for the Paraglider, the Old Man agrees to give it to Link in exchange for the treasure resting in the nearby Oman Au Shrine.[4] Upon completing the Shrine, Link is confronted by the Old Man, who then tells him that he must complete the three remaining Ancient Shrines on the Great Plateau before he hands over the Paraglider.[5]

The Paraglider consumes Link's Stamina when used, limiting the time in which he may glide through the air. If Link uses the Paraglider over a vertical draft caused by burning grass, he will be propelled upwards by the vent of wind. Link can also use the Remote Bomb Rune while gliding to attack enemies below.[6] When Link's Stamina runs out mid-flight, he will automatically put away the Paraglider and fall to the ground. While having no Stamina, the Paraglider can be taken out for one second only once in order to break Link's fall.

A slow-down effect will occur when Link aims with a Bow while airborne. The Paraglider is useful for performing this. While aiming, Link's Stamina will be drained quickly and Link can stop aiming by pulling out the Paraglider.

Link uses a new Paraglider while among the islands in the Sky.

Icon of the Paraglider from Mario Kart 8 Deluxe

The Paraglider is a Glider that accompanies the Master Cycle Zero and the Ancient Tires in the version 1.6.0 update of Mario Kart 8 Deluxe.

The Paraglider is unlocked immediately after downloading the update.

In Hyrule Warriors: Age of Calamity, Paragliders are used by flightless Warriors such as Link or Zelda to traverse around the map by gliding.