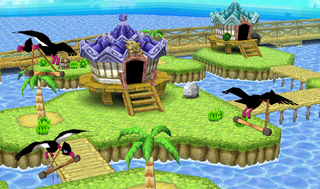 Papuchia Village is the primary area of activity within the Ocean Realm in Spirit Tracks.[1] It is inhabited primarily by Hylian villagers who greatly honor the Village's most interesting inhabitant, an elderly fortune-teller known as the Wise One.

Located just past the entrance bridge leading into the Ocean Realm, the coastal Papuchia Village is a favorite place to visit for the Ocean Realm's Lokomo sage, Carben, who comes to the Village to converse with the birds that gather there and fly low in circles over the Village. The Village itself is relatively small, with only a few huts built across a bridge-connected archipelago that comprises the ground upon which the Village is built. The Village is also Hyrule's main supply of Fish, due to its coastal location. In the middle of the main area of the Village resides an elderly woman known as the Wise One. All of the Villagers greatly trust in her words of wisdom, and Link can go visit her to reveal his fortune any time he wishes.

Papuchia also has its own Shop that offers travelers basic items like Arrows, Bombs and Potions, among other things. To the southeast of the Village is a small island that leads to the southern portion of Papuchia, which can only be reached by using the Whip and the Song of Birds. This section contains various islands scattered throughout, as well as several birds floating around the area. Link must continuously use the Whip to reach the southwestern island, which is where the Stamp Station is located.

Link comes to the Village after visiting the Ocean Sanctuary and learning that Carben has left the sanctuary to visit with his bird friends in the Village.[2] Upon learning the Song of Birds from a Air Stone hidden in front of a tree, Link is able to get Carben's attention and takes him aboard the Spirit Train back to the sanctuary (dodging pirates along the way) in order to perform the necessary duet with the Lokomo using the Spirit Flute to restore the lost Spirit Tracks of the Ocean Realm and thus reach the Ocean Temple.[3]