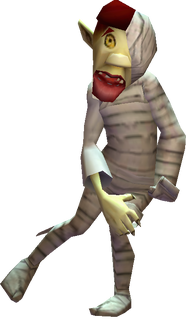 Pamela's Father is a character in Majora's Mask.[2]

Pamela's Father is a scientist who researches supernatural phenomena like Fairies and ghosts.[3] He lives with his daughter Pamela in the Music Box House of Ikana Canyon. He moved with Pamela from Clock Town to Ikana Canyon in order to research the ghosts and spirits that haunt the Ikana Valley.[4] They settled in a house at the top of the canyon, which he later turned into the Music Box House. While studying Gibdos, he discovered a song called "Farewell to Gibdos," which drives away the mummified creatures.[5] He programmed the Music Box House to play this melody, keeping Gibdos away from their house.

One day, while continuing his research of Gibdos, he tried to go into the nearby well.[6] He then got cursed, which gradually caused him to start turning into a Gibdo. Meanwhile, the river that kept the Music Box House working dried, stopping the music and letting the Gibdos roam free. The frightened Pamela shoved her father in the closet of the basement, keeping him away from the Gibdos that had begun gathering outside her house, believing that her father is one of them.[7] Pamela keeps her door locked at all times and refuses to open to anyone who tries to enter, thinking that they are Gibdos trying to take her father away.[8]

Link eventually drives away the mummified creatures by restoring the flow of the river, which causes Pamela to unlock the door to her house. When Pamela leaves her house to inspect the well, Link can sneak in and go into the basement. There, Pamela's Father lunges out from the closet in which he was being kept and starts approaching the young hero at a slow pace. Link can then play the "Song of Healing," lifting the curse and leaving the Gibdo Mask behind. Pamela then comes in and embraces her father, who is completely unaware of the events that have taken place.[9] If Link later talks to Pamela, she reveals that she keeps his assistance a secret from her father.[10] If Link instead gets too close to Pamela's Father while he is approaching or tries to draw his Sword, Pamela will appear and kick him out.[11] If this happens, Pamela's Father will seem to recognize his daughter and will then curl into a ball, moaning and clutching his head.

Pamela's Father has an extensive knowledge about Gibdos and Garo Robes, and he is happy to explain the background of the monsters.[12][13] If Link speaks to him while wearing one of the transformation masks, his Ghost Radar will react, and will then proceed to ask the young hero to stay so that he can research him.[14] He is also interested in studying Tatl, who he claims is more lively than most Fairies he has seen,[15] and the Gibdo Mask, which he believes will help him understand the Gibdo life-form itself.[16]

Pamela's Father mentions that there have been rumors of Garo sightings near Romani Ranch,[17] noting that it is strange for them to show themselves to people.[18] These so-called Garo are implied to be the Gorman Brothers, who wear Garo Masks on their night raids.