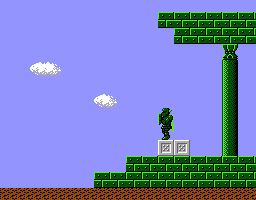 Entrance to Palace on the Sea

Placement of one of the Crystals

Palace on the Sea guide
at StrategyWiki
The Palace on the Sea is the fifth Dungeon in The Adventure of Link.[1] It is located in Eastern Hyrule and is visited by Link during his quest to place one of the shards of the Magic Crystal to its lectern to gain access to the Great Palace, find the lost part of the Triforce and rouse Princess Zelda from her unnatural slumber.

As it is on an island completely separated from land, and there is no dock sufficient to launch the raft from, Link can only reach the Palace by walking on the water separating the tiny island from the mainland with the boots. The isle itself is placed east from Nabooru Town.

Built with green-colored bricks, this dungeon is notable for its trickery, not only because of its size, but also because it's the first palace with a fake wall. The Mago debuts here, and unlike Wizards Link can't repel its projectiles (which, in this case, are dense flames).

Within the Palace walls, Link finds the Flute, useful to gain access to new areas with the help of music.

In the Japanese version, blue Octorok appear in this palace as regular enemies as Mazura also reappears as a mini-boss; in international versions, these are replaced by blue Aneru and a normal blue Iron Knuckle, respectively.

The Palace on the Sea also appears in the The Legend of Zelda comics by Valiant Comics. When Princess Zelda realizes that the only way to keep the Triforce of Wisdom is by going to a faraway land with the sacred relic in hand, she decides to go to the Fifth Palace located on the Island of Hyron and retrieve the Magic Flute from there, which will warp her to a distant location.[2][3]

When the duo reach the Palace on the Sea, they are confronted by a Blue Iron Knuckle.[4] After a grueling battle, Link defeats his foe, knocking its helmet off and revealing that it is a human, and not a monster, under the armor. The man explains that an old king charged him with protecting the treasures within the palace,[5] and that he was to stop anyone who was unworthy.[6] He tells the duo that by defeating him, they are free to take what they want.[7] The knight shows Link and Zelda a secret wall, and Link enters in to obtain the magic flute for the princess to take.