Zelda Wiki
Register
Don't have an account?
Sign In
Advertisement
in: Dungeons, Palaces, Dungeons in A Link to the Past
English 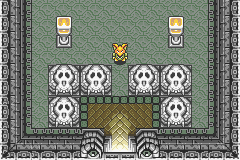 A Link to the Past & Four Swords

Palace of the Four Sword guide
at StrategyWiki

The Palace of the Four Sword is a bonus Dungeon included in the Game Boy Advance version of A Link to the Past.[1]

The Palace is accessed through a new entrance on the eastern side of the Pyramid of Power. The first room is guarded by a Gatekeeper who will not allow Link to enter unless he is worthy. After completing Four Swords and defeating Ganon, Link is then deemed worthy and the Gatekeeper disappears upon payment of 20 Rupees, allowing him to progress inside.

Soon after entering the dungeon Link is faced with a large room with four doorways which he can enter, and a fifth protected by a magical barrier that even his Master Sword cannot destroy. Each doorway leads to a small series of puzzle-filled rooms, culminating in a boss battle before Link is presented with a sword in a pedestal. Each of the four blades represents an element of the Four Sword.

The puzzles contained within the Palace are not easy, and often make use of aspects of gameplay that are not available in the original version of A Link to the Past, such as Link's ability to dive when using Zora's Flippers, and other advanced techniques. Link will also face the only Octoroks, Octoballoons and Keese in the Dark World, and despite looking similar to their Light World equivalents, they are stronger than those found in Hyrule. The dungeon even contains Like Likes, which only make their appearance in the Game Boy Advance version of the game, and are able to eat Link's Mirror Shield.

Once Link has collected all four blades, he is able to destroy the barrier that leads to the Master of the Dungeon. In the boss' room, the four swords soar away from Link and he must face four Shadow Links in turn, each seemingly having cursed each of the four elements. Upon their defeat, the Four Sword is finally restored to its former glory and held aloft by Link. When Link completes the palace, the player is given the option of starting a new game at the starting screen of A Link to the Past.

The background and canonicity of this palace is unknown.

Guarding the Green Sword, a more powerful version of the original Arrghus in the game, a large and rather grotesque jellyfish surrounded by smaller jellyfish. Link can use the Hookshot to pick the small jellyfish off, and then while Arrghus is bouncing round the room, attack him. He takes 9 hits from the Level 4 Golden Sword to go down.

Again, a more powerful version of the boss guarding the Palace of Darkness. By using Bombs/the Magic Hammer to remove his mask, Link can then hack away at him with his sword. Again, 9 hits from the Golden Sword, and then he grows another mask. This time, the young hero removes the second mask, and then shoots a single Silver Arrow into the eye revealed on the Helmasaur King II; trying to attack with the sword at that moment won't work.

Mothula II splits itself into 3 different Mothulas upon arriving, which all attack and fire bees at Link. A fake Mothula II can be easily destroyed in a couple of hits, but in that case the original proceeds to create more. There is no real strategy, except to just trying to find the original Mothula II, and hack at him. 8-10 hits from the Level 4 Golden Sword are required to defeat the monster.

Another improved version, this time of Blind the Thief (who now disguises as Link's Uncle). Link gets him in the head 3 times with his sword (while avoiding the highly dangerous laser attack he utilities), and Blind's head detaches. The young hero then attacks the head and it bounces around the room; he must try and make it bounce back on to Blind's body, so that it rejoins him. He repeats the first step, and two heads proceed to detach. Link bounces them both back to the body, and then repeats the first step again. Three heads will now detach; the entire process is repeated once more, and the opponent finally dies.

Four doppelganger Dark Links; arguably more difficult than all the first four bosses combined. They will attack one at a time, allowing for a less frantic battle. The first Link is rather easy, and can be disposed of in 8 hits; the authentic Link must make sure to avoid the attacks. The second Link is nearly identical, except he can use the Whirlwind Spin attack. Still not difficult with some attack timing; another eight hits, and he's down. The third is slightly more powerful; he'll use a dangerous dive attack that is difficult to detect and then dodge, and hits for a lot of damage. 8 more hits leave the final Link, and the Final Battle. This one employs the attacking strategies of all three previous Links, plus an even more dangerous and quick lunge attack; plus, it takes 16 hits to beat him.

For completing the Palace of the Four Sword, the player is granted the ability to view a Quest Log during the ending credits; this shows various data about the player's status in the game.