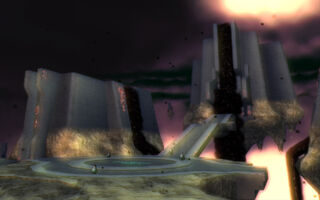 The first objective is to bring back light to the corrupted Twili people, as well as to bless the Master Sword with the Sols to turn it into the Light Sword. To reach both goals, Link needs to return two special objects called Sols to the entrance. The Sol is to the Twilight Realm as the sun to the light world: It is vital for life and energy. The two Sols are located on the first floor on the west and east sides of the palace, respectively.

Link will be forced to fight Phantom Zant twice, once for each Sol. Link will then have to utilize the Sol to activate platforms that lead him back to the dungeon's entrance, all while retrieving the Sol before mysterious hand-like monsters resembling Wallmasters, which are given the name Zant's Hand, take the Sol back to its resting place. Returning the two Sols to the entrance will infuse the Master Sword with their light, and allow Link to make his way to Zant's throne.

The palace contains a new element exclusive to the palace only: Dark Fog, a haze composed of shadow crystals created by Zant. They are the pure essence of darkness and shadow, and the element is scattered across various locations of the palace. If Link enters the fog, he will transform into his wolf form, and will be unable to turn back into his human shape until he leaves the fog. Link will be able to cut the dark fog once he has the Light Sword.

In addition to regular monsters seen in the Twilight Realm, Link will also encounter monsters that resemble Zant's mask, thus given the name Zant Mask, also exclusively found in the Palace of Twilight. They will periodically shoot blasts at Link, then warp to another location. Link will frequently need to defeat these monsters to get keys in the palace.

After a long way to the dungeon's last floor, the throne floor, Link will reach the throne room and battle none other than the Usurper King Zant himself.

The Palace of Twilight is a stage in Hyrule Warriors where the Hookshot can be obtained. Argorok and Zant appear as the stage's bosses.