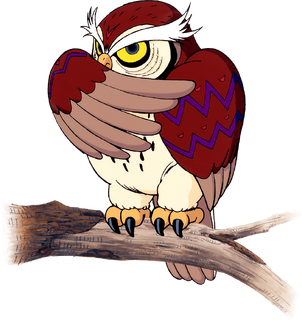 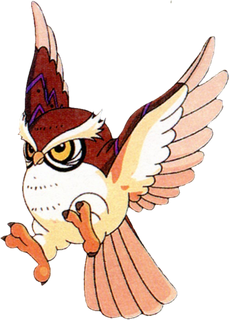 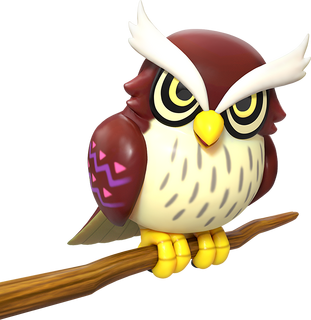 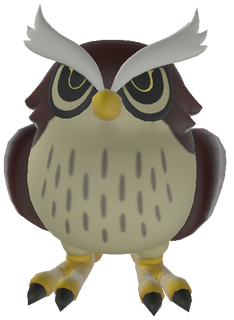 The Owl is a character in Link's Awakening.[2]

The Owl appears to Link as soon has he finds his Sword in Toronbo Shores.[3][4] He appears again on multiple occasions to share his words of wisdom.[5] The Owl is greatly concerned of the Wind Fish's eternal slumber and upon seeing Link, believes that he could be the one who would awaken the Wind Fish.[3]

Giving Link directions in the form of riddles,[6] the Owl sends him to various Dungeons of the isle to retrieve the Instruments of the Sirens,[7] which are all needed to awake the Wind Fish.[8] The Owl is also constantly reminding Link that the Wind Fish is watching his progress and awaits to be awakened.[9]

Upon getting the Full Moon Cello from Tail Cave, the Owl would once again appears.[8] He mentions that at first he did not believe that Link was real, suggesting that he believed that he was actually a part of the dream world, as Koholint Island is a mere illusion dreamed up by the sleeping Wind Fish.[8] However, since Link had gotten the Instrument of the Sirens, it would seem that the Owl now believes that Link is in fact real. When explaining what the Instrument of the Sirens is, the Owl also mentions that he was given instructions to guide Link.[8]

After getting the fifth Instrument of the Sirens, the Owl will then instruct Link to the Ancient Ruins, where ancient ruins speak of the Wind Fish.[10] After defeating the Armos Knight there, Link discovers some writing and a drawing on the wall. The wall reveal that Koholint Island is a dream of the Wind Fish and by awakening him would make the island disappear. The wall depict a drawing of the Wind Fish as well as the Owl. The Owl outside reassures Link by telling him that no one is really sure whether the foretelling is true or not, and the only way to find out would be to awaken the Wind Fish. The Owl then tells Link to trust his feelings and then flies off.[11]

In the Link's Awakening manga by Ataru Cagiva, the Owl first appears after Link finds his Sword, asking if he is the messenger of awakening that has come to awaken the Wind Fish. After Link retrieves the Full Moon Cello, the Owl introduces him to Felicia to assist and look after him. Throughout Link's journey in Koholint Island, the Owl serves as his guide, telling him where his next destination is.