Zelda Wiki
Register
Don't have an account?
Sign In
Advertisement
in: Locations in The Wind Waker, Islands, Link's Hometowns,
and 2 more
English 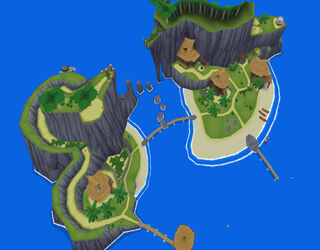 Outset Island from The Wind Waker

Great Sea
Outset Island is a location in The Wind Waker.[1] It is located at the southern end of the Great Sea. It is home to only a few families, including that of Link, which consists of his sister Aryll and their beloved Grandma. On this island, it is customary to garb boys in green when they reach the age of the fabled "legendary hero."[2]
Fishman's Comment:
Tingle's Comment:

Outset Island consists of two main islands connected by a wooden bridge. Of the four houses on Outset Island, three of them are situated on the western island. The eastern island has a winding pathway to the summit, where there is a suspension bridge that connects the two areas. Across the bridge is the Forest of Fairies, where Link rescues Tetra after she is dropped there by the Helmaroc King at the beginning of the game. Later, the water spirit Jabun makes his home in the cave at the back of the island after his original residence, Greatfish Isle, is destroyed by Ganondorf. However, the cave is blocked by a large stone that can only be removed by bombs via cannon. Upon destroying the large stone, Link can go in and talk to Jabun to receive Nayru's Pearl from him.

Aryll's Lookout,[3] also called the Watchtower,[4] is a tall, stationary crow's nest that was most likely built to spot oncoming ships. Because of Outset's distant location from many other inhabited islands, however, it is mainly used by Link's little sister to play with the gulls.[3] She often uses her telescope from the Lookout to watch over the island.

The Forest of Fairies is situated at the top of Outset Island. Link first visits the Fairy Woods after Helmaroc King drops Tetra into the forest.

A cave can be found at the rear of the island's left side, which becomes occupied by Jabun after the destruction of Greatfish Isle and is sealed by a large stone slab and guarded by a strong whirlpool, both of which Link must overcome to meet with the Sea Spirit and obtain Nayru's Pearl from him. The cave appears empty for the remainder of the game, should Link choose to visit it later, due to Jabun only residing beneath the water's surface.