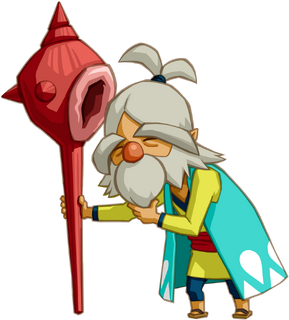 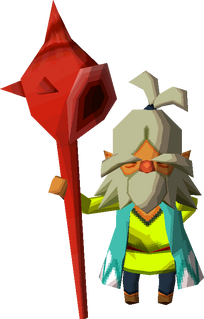 Oshus,[3] also known as the Ocean King,[3] is a character in Phantom Hourglass. He watches over the World of the Ocean King. He is the creator of the Phantom Hourglass. His true form is that of a large white whale, but he initially appears to Link as an old man on Mercay Island, where he helps him begin his quest by introducing him to Ciela. He is able to control the flow of time.[4]

At the beginning of the game, Ciela finds Link at the Mercay Island beach, and she tells him about her "Grandpa", who found her and took care of her when she lost her memory.[2] Link goes into a house near the beach and finds an old man called Oshus. Even though Ciela told him what happened, Oshus want him to stay away from the Ghost Ship.[5] Seeing that Link is not going to give up, Oshus tells him about someone who could help him, a sailor named Linebeck.[6] After some time, Link steals Oshus's Sword, and Oshus teaches him how to use the Sword.[7] Once Link recovers the Spirit of Courage from the Temple of Courage, Oshus reveals that it was in fact the missing part of Ciela, because she separated herself to escape from Bellum and fuses the two.

Soon afterwards, when Link finds Tetra petrified aboard the Ghost Ship, Oshus appears and reveals his true identity to Link and Linebeck, and explains that much of his life force was stolen by Bellum, who is using the ship to collect more victims, and that they had to help him defeating Bellum. His further revelation that there was no treasure aboard the Ghost Ship infuriates Linebeck, who refuses to continue cooperating until Oshus promises to grant him one wish. Oshus tells them about the three Pure Metals and that they can forge the Phantom Sword. Link finds the three Pure Metals and Zauz, a blacksmith, create the Phantom Blade. Oshus uses the Phantom Hourglass and creates the Phantom Sword. After Bellum is defeated and his life force is returned, Oshus reveals his true form, a white whale, grant a wish to Linebeck and send Link and Tetra to their original world. Oshus provides Link with the Oshus's Sword and Phantom Sword.

Oshus first makes his appearance while reading a story to a group of children on Mercay Island. He tells the children a tale about a hero who goes to save a princess from her crystal prison inside a monster's castle.[8] Oshus decides to continue the story the next day,[9] receiving complaints from the children.[10][11] He says stories like this always have cliffhangers.[12] Ciela, who was also listening to the story, flies to the beach and finds Link unconscious on the shore. Links mentions the Ghost Ship so Ciela brings him to Oshus.[13][14] Oshus learns that Link wants to help his friend Tetra, who is captured on the Ghost Ship.[15] Despite this he tells the hero to quit, as those aboard the Ghost Ship are doomed to forever walk as corpses.[16] Link says he is a hero who has sailed the high seas and defeated powerful monsters, claiming that he will save Tetra.[17] Calling Link a stubborn lad, Oshus tells him to find a sailor named Linebeck at a port town to the east.[18] Oshus says Linebeck has sailed every sea there is and may know more about the Ghost Ship.[19] As Ciela and Link head to the town, Oshus looks at his story and recognizes the hero's picture as Link.[20] He states that he should get ready.[21]

Oshus appears again after Linebeck has opened the treasure chest he tricked Link into retrieving. When he discovers the occupant is an hourglass instead of treasure, Linebeck accuses Link for messing with him.[22] Oshus confirms the hourglass as treasure, calling it the Phantom Hourglass.[23] Link and Ciela are surprised to the elderly man.[24][25] Oshus says Link is brave for someone so young, since he entered the Temple of the Ocean King and returned with the treasure.[26] He explains the temple is under a curse that sucks the life from those who enter.[27] He also says the Phantom Hourglass will keep Link's life from being drained until the sand runs out.[28] Link notices the Hourglass is empty.[29] Oshus answers that it has to be filled with the Sand of Hours, which is kept by monsters living on various islands in temples.[30] If the refilled Hourglass is brought back to the temple, the curse can be lifted and the real treasure gained.[31] In addition, Link's friend Tetra can be saved.[32] Link asks Oshus how he knows so much, with the older man replying he will tell everything later.[33] He tells Link the sea chart he possesses marks the temples where the monsters lurk.[34] After giving the hero a sword and shield, Oshus says he will pray for them.[35][36] With Linebeck and Ciela, Link then embarks on his quest.

Later on, Link and his companions save a little girl from the monster Crayk. Link is confused because the third Spirit hasn't appeared after the monster's defeat.[37] Oshus then presents himself, stating the third spirit is already there.[38] He apologizes to Ciela for keeping the truth from her, revealing the fairy to be the Spirit of Courage.[39] Oshus explains how the Ocean King saved her and that the little girl they rescued is actually Ciela's embodied lost memories.[40] Since Crayk has been defeated and there is no one left to threaten Ciela, Oshus tells her to return to her original form.[41] Once Ciela has returned to her form as a Spirit, Oshus asks the fairy how she feels.[42] She says like everything changed and nothing did.[43] Ciela hears a voice calling from the Ghost Ship, which turns out to be Tetra's.[44] As the group leaves to rescue Tetra, Link asks Oshus how he is related to the Ocean King.[45] Oshus says his story can wait, urging the hero to save Tetra quickly.[46]

Aboard the Ghost Ship, Link finds Tetra as a petrified statue.[47] He and his comrades are confronted by one of the Cubus Sisters, who sends an energy ball at Tetra's statue in an attempt to harm Link. From the statue rises Princess Zelda, Tetra's real identity.[48] After rebounding the Cubus Sister's magic, Princess Zelda spots Oshus behind them and smiles. Linebeck goes into a frenzy at this, thinking Princess Zelda is possessed by the Ship's undead.[49] Oshus calls Linebeck a fool and tells him to get a hold of himself.[50] It is then Link says he thinks Oshus is actually the Ocean King.[51] Oshus calls Link a smart lad and confirms this.[52] Oshus says he can now tell Link everything.[53] The ocean was originally filled with force energy, until several years before when a monster appeared and attacked.[54] His name was Bellum, a monster that ate force energy.[55] Oshus says when he attacked Bellum his force was drained and he was sealed beneath a temple.[56] Even now the monster is draining his force, as he can barely hold his current form together.[57] Oshus says Bellum is not content with the force drained from him, so he created the Ghost Ship to devour other beings' force.[58] Oshus believes that Tetra was turned to stone because Bellum could not drain her overflowing force energy completely.[59] If Link defeats Bellum and brings the Sand of Hours to Oshus, he can restore Tetra's force.[60] Oshus instructs Link to visit the blacksmith Zauz, who knows how to defeat Bellum.[61] Linebeck is reluctant to accompany Link until Oshus promises to grant him one wish if he does.[62] Linebeck calls Oshus an old man and questions if he is serious about this.[63] Oshus responds by saying he is not a man but a spirit, meaning he cannot lie.[64] However, Linebeck will not get his wish unless they succeed in defeating Bellum.[65]

After a confrontation with Bellum, Link weakens the monster. With Bellum in a weakened state, Oshus returns to his true persona as the Ocean King, rescuing Link, Linebeck, and the Spirits from the collapsing temple.[66] Tetra is also freed from her petrified state. Suddenly, Bellum appears and takes hold of the Ocean King, dragging him under water in an attempt to drown him.[67] Jolene arrives with the newly forged Phantom Sword made by Zauz, giving the weapon to Link.[68] With help from Tetra and Linebeck, Link slays the monster. The Ocean King thanks the heroes for saving him and the ocean.[69] The deity goes on to say how his world, the World of the Ocean King, is a separate dimension then Tetra and Link's.[70] The hero and pirate captain then return to their world.

Oshus's Japanese name, Shīwan (シーワン), might be composed of "shī", a Japanese transliteration of the English word "sea", and "wan", the Chinese reading of the character "王", meaning "king" (which is also a very common name).