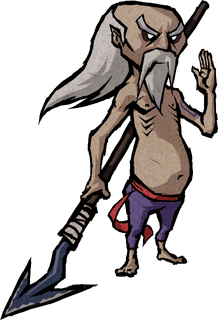 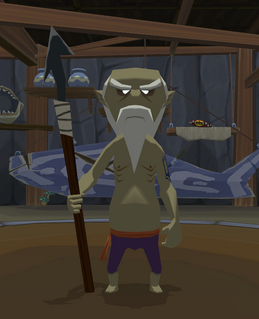 Orca is a character in The Wind Waker.[2] An elderly man, he was once a master swordsman.[3] He teaches Link the way of the sword, though he himself now wields a spear. He gives Link his first weapon, the Hero's Sword.[4][5] Later in the game, Link can practice against Orca in an endurance mini-game. Orca gives Link a Piece of Heart if he can hit Orca 500 times before Orca knocks him down three times. When Link obtains 10 Knight's Crests, Orca teaches him the Hurricane Spin.

Orca lives on Outset Island on the ground floor of a house he shares with his older brother Sturgeon and great-niece Sue-Belle.[6] Orca does not get along well with his older brother, who considers Orca a "hooligan" for preferring martial arts to book study.[6][7] Orca has a calm disposition and thinks his brother is high-strung.[8]

At the beginning of The Wind Waker, Orca offers to teach Link basic sword techniques using the Hero's Sword. However, he refuses to give Link a sword for fear of upsetting Link's Grandma.[9] He refuses no matter how many times Link completes the tutorial and continues to insist Link must practice more.[10] Orca is unaware of Tetra's fall into the Fairy Woods when Link returns for practice, but the swordsman senses a change that prompts him to give Link the Hero's Sword.[11]

Upon Link's return to Outset Island later in the game, Orca remarks that he has changed.[12] Orca asks Link to show him how much his skills have improved.[13] If Link accepts, a mini-game begins in which Link must strike Orca as many times as he can before Orca strikes him three times.[14] Before starting, Orca taunts Link, stating that his skill level is only that of a page.[15]

If Link hits Orca 100 times before being hit three, Orca declares him to be a knight,[16] and gives him a Purple Rupee. 300 hits convinces Orca to give Link an Orange Rupee and increase his rank to "swordsman".[17] For 500 hits, he gives Link a Piece of Heart.

At 1000 hits, Orca loses count and ends the battle. He gives the young hero a Silver Rupee and calls him Master Link from then on.[18] He remarks that his arm feels numb, and asks Link if his left index finger is numb too.[19] This is a fourth-wall-breaking reference to the prolonged holding of the L-Target that is required if the Targeting Mode is left to the default "Hold".

If struck outside a training context, Orca automatically blocks the strike with his spear. He expresses annoyance when Link strikes him three times,[20] and again more pointedly after five times.[21] On the sixth strike, he yells at Link to stop and knocks him down.[22]

In their youth, Orca and Sturgeon longed to learn the Hurricane Spin. They spent several years collecting the requisite Knight's Crests, but grew old before they could gather the ten needed to learn the secret technique.[23][24]

After Link departs from Outset Island,[when?] Orca sends him a Letter with instructions to bring back Knight's Crests.[25] When Link presents 10 Knight Crests to Orca, he teaches Link the Hurricane Spin technique that he and Sturgeon were never able to master. Orca drops his spear and cries tears of joy at having his long-held dream come true.[26] Orca will then say that there is no longer anything left for him to teach Link,[27] and expresses his certainty that Link will be successful in his quest to save Aryll and bring her home to Outset Island.[28]

The first time Link shows Orca Knight's Crests, Orca drops his spear. If Link has less than 10, he is then able to attack Orca while he is without his spear. Orca will still block the attack, defending himself with only his hands and legs.