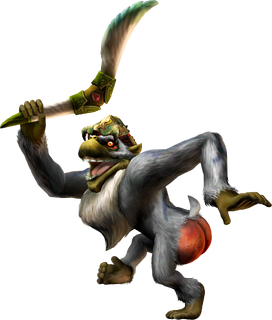 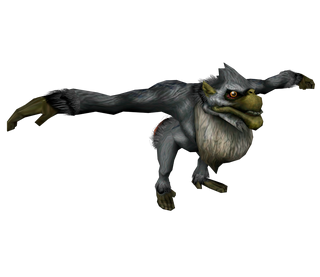 Ook is the Sub-Boss of the Forest Temple in Twilight Princess.[3]

Ook is the leader of the Monkeys of Faron Woods, who is being controlled by a parasite.[2] He is first seen when he cuts down a bridge across a chasm with the Gale Boomerang in the Forest Temple.[4] Later, when Link enters his chamber, he finds the primate standing atop a pillar. Ook then swings his Gale Boomerang at several Baba Serpents hanging from the ceiling, then taunts Link by spanking his bottom, and initiates a battle with him. After the battle, Ook's parasitic mite is destroyed and he returns to normal, and he later returns to help Link battle Diababa, the dungeon's boss. He aids in the fight by swinging across the room on a rope carrying Bomblings for Link to use against Diababa.[5]

Ook throws his Gale Boomerang at Link while jumping across several pillars in the center of the room. The Baba Serpents that Ook cuts off from the ceiling will chase after Link after they hit the ground. Dodging Ook's Boomerang is easy, but getting him down from the pillars is a little more difficult. After he throws his Boomerang, Link must dodge it, then ram the pillar he is standing on. This will cause Ook to lose his balance and get knocked off the pillar by his own Boomerang when it comes back. Once Ook has fallen, his bottom becomes vulnerable. After slashing at him a couple of times, he cuts down more Baba Serpents from the ceiling to attack Link. Once he is defeated, it is revealed that a gigantic mite on his head was controlling him. Defeating him also yields the Gale Boomerang.