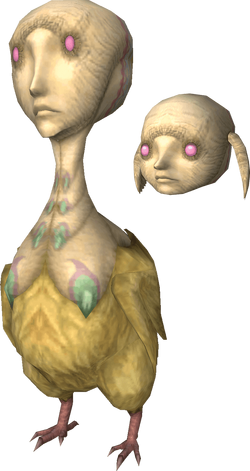 Ooccoo
Ooccoo Jr.
The Oocca are a recurring species in The Legend of Zelda series.[2][3] They are an ancient race of sky beings who live in the City in the Sky, and are the race which Ooccoo belongs to.[4] They have bird-like bodies and oblong heads with humanoid faces. Some Oocca are familiar with the Hylian Language and are capable of speaking it, but they also have their own language which sounds like jabbering and strange squawking noises.[5]

Despite their small bodies, the Oocca are seen to be highly developed in terms of technology. They have built massive cannons that are capable of launching someone to and from the heavens, crafted a rod that can bring life to inanimate objects, and even built their own city in the sky that is held up by powerful propellers.

Shad, following in his father's footsteps, has devoted his life to studying the Oocca.[6] According to him, the Oocca are the closest race to the gods, closer even than Hylians, whose land, Hyrule, was founded by the Oocca.[7] After the Goddesses created the Hylians, the Oocca simultaneously formed their own city: a city that floats in the heavens which can only be reached via a Sky Cannon.[7]

The Oocca civilization is said to have prospered before the arrival of Hylians, and that they developed materials through magic to form an advanced society in the sky.[8] There is also a theory that they are the Hylians' ancestors and the closest people to the goddess Hylia.[9]

To maintain contact with the Royal Family of Hyrule, the Oocca created a mysterious rod known as the Dominion Rod. This rod would only be carried by one known as the messenger to the heavens, who would then use the rod whenever the Royal Family needed to communicate with the Oocca.[10] Along with the rod of the heavens, the sky beings left the Ancient Sky Book with the Sheikah, which was to be given by royal decree to the heavenly messenger.[11]

It can be assumed that by the time Twilight Princess takes place, the Oocca have stopped communicating with the Royal Family of Hyrule. Why this happened is unknown. Judging by the deteriorating condition of the City in the Sky, they may have simply lost the means to do so.

When Link visits the City in the Sky, he can use the Oocca he finds walking about to progress through the dungeon by picking them up and using them to float across large gaps, much like he would use a Cucco. Although the Oocca squawk madly when picked up, Midna tells Link that they don't seem to mind, and in fact wish to help him.[12]

The Japanese name of the Oocca is 天空人 (Tenkuujin), "tenkuu" meaning "sky" and "jin" meaning "folk". As previously with the トカゲ人 from Oracle of Ages, rather than providing a literal translation as Western name, the localization team chose to offer some creativity and gave the "sky folk" a proper designation that fits with the rest of the races' names. "Oocca", as well as "Ooccoo" who in Japan essentially goes nameless as "kind older lady", is a play on "Cucco", the popular term for chicken in the The Legend of Zelda series. A few bits in the Western text do utilize a direct translation of "天空人", mostly through an extended form such as "the sky beings known as the Oocca". Interestingly, "sky being" is also the preferred translation in the descriptions of Ooccoo, which read "Ooccoo the sky being" rather than "Ooccoo the Oocca".