Zelda Wiki
Register
Don't have an account?
Sign In
Advertisement
in: Oracle of Seasons (Himekawa) Pages with Invalid or Missing Terms, Dragons, Knights,
and 5 more
English 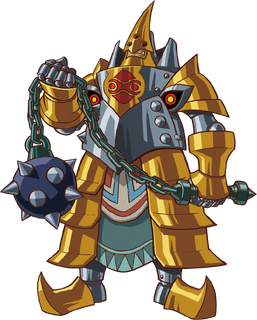 Onox,[4] also known as General Onox,[5] is one of two main antagonists in Oracle of Seasons. He calls himself the "General of Darkness",[1] and wishes to ruin the land of Holodrum in accordance with the wishes of his master, Twinrova. To do this, Onox is tasked with the burden of capturing the Oracle of Seasons and submerging the Temple of Seasons.[6] Although Onox appears to be a giant in armor reminiscent of an Iron Knuckle, his true form is that of a dragon, summoned from the Dark Realm.[2]

By capturing Din, the Oracle of Seasons, and encasing her in a crystal, Onox is able to submerge the Temple of Seasons into Subrosia and throw the flow of the seasons into chaos,[7] resulting in the damage of the land and the weakening of the Maku Tree.[8] To counter these events, Link sets out on a quest to obtain the Essences of Nature, which allow him to enter Onox's Castle on the Northern Peak to face him and revert his deeds.[3]

After obtaining every Essence of Nature, Link goes the Northern Peak, where he uses their power to bust into Onox's Castle, breaking the protective barrier he had placed upon its entrance to bar intruders. Link faces Onox in two segments, the first in his natural form, using the comatose Din within a crystal to shield himself from Link's attacks. Before Link can defeat Onox, however, he reveals his second, true form to him.[2] After defeating Onox, rather than cursing his own fate, he mocks Link as he dies, revealing that the Flame of Destruction has been lit, and Twinrova's grand scheme is one step closer to fruition.[9]

If Link has already saved Nayru from Veran in Oracle of Ages, when Link reaches Onox at the top of the Onox's Castle, he will reveal to Link that Princess Zelda is already being prepared for sacrifice, so that Ganon can return.[10]

Onox deals out massive physical damage with his attacks. His armor also blocks normal attacks with the Sword, so Link must use Spin Attacks to get through. Onox is capable of bringing down a barrage of rocks from the ceiling, and summoning multiple tornadoes. Partway into the battle, Onox will summon Din still trapped in a crystal as his shield. The Rod of Seasons must be used to knock Din away, or Link will be electrocuted whenever he attacks Onox. Despite this, Din, will always drift back to Onox eventually. After Onox is defeated again, he will transform into his dragon form. From here, Link must jump onto Onox's hands, then attack the gem on his head.

Onox reprises his role as the main antagonist of the Oracle of Seasons manga where he is depicted as a ruthless knight who is on the search for the Oracle of Seasons, Din. In the manga, he gains the ability to directly sap the life energy of the landscape and any lifeforms that he touches, leaving behind barren land and lifeless husks. Though he is also able to hypnotize beings into violent, selfish manifestations of themselves, such as turning the once-honorable boxing champion Blaino into a bully that steals opponents' weapons after they're defeated.[11][12] Like in the game, he captures Din in order to put the seasons into chaos and sink the Temple of Seasons into Subrosia, though he plays a much more active role in barring Link from completing his quest by sending monsters to do his bidding, such as placing Medelock in the sunken Temple of Seasons and sending out an army of minibosses such as Aquamentus and Syger on the mountainside in order to prevent Link from reaching the castle. His main goal is to turn Holodrum and its inhabitants into a lifeless wasteland and keep Din around as the only mote of beauty in his world.[13][14] Despite wearing the armor of a knight, Onox disregards the ideals of chivalry and honor, such as mercy and protecting the innocent, as just childish naivete and argues that brute strength is all the really matters.[15]

He first appears while riding horseback along with two guards wandering on the road, where Link, feeling frustrated about running away from Din when she offered him to dance, accidentally tosses a branch over his shoulder, which lightly hits and bounces off the head of Onox's armored horse. When Link tries to apologize for the mishap, Onox interrupts him and orders the guards to kill him. In response, Link questions why he would attack while he's in the middle of apologizing, with Onox retorting that he holds no mercy for anyone that tries to oppose him, no matter how small and insignificant.[16] This prompts Link, who is training to be a knight, to chastise Onox for his unknightly behavior and defeats his guards.[17] With them defeated, General Onox takes it upon himself to unleash his power, the ability to drain life and power from all living creatures, leaving behind death wherever he steps. Though to Link's surprise, he is also able to spread and manipulate the dark magic to his will, catching Link off-guard as he tries to outrun his magic but fails as he has his energy drained from him. While on the ground helpless, Onox takes the opportunity to grab him by the head and boast about his unique ability before sapping Link's life and continuing his search for the oracle.[18] Afterwards, Din stumbles upon the barren land that Onox left behind, lamenting at how far his destruction has spread across the land, only to find Link nearby.[19] At first, she assumes that he is dead though quickly finds that only his life energy was drained, allowing her to undo the damage that Onox had caused by breathing life back into Link with the help of the Season Spirits.[20][21][22] However, this turns out to be a trap as Onox later returns to the spot where he left Link, noticing life returning to the area, giving away the oracle's presence nearby.[22] He sends his minions to scout the area, and they report back to him on Din's disguise as a traveling performer, and that her troupe is headed to the Temple of Seasons.

He is encountered again at the Temple of Seasons, where he strikes the temple with lightning in order to force Din out of the building and demands her to come with him to his castle. When she refuses and orders him to stop polluting the land, he makes an attempt to grab her only to be stopped by Link, much to his surprise as he had presumed Link to have perished from their last fight.[23] Link tries to fight Onox in order protect Din, but quickly finds himself to be of no match as he has to constantly dodge Onox's ball and chain, and is knocked to the ground after a feeble attempt to deflect the weapon with his sword. When Impa tries to intervene, Onox strikes her down with his fist. Before Onox can finish him off, Din agrees to leave but only on the condition that Link isn't harmed.[24] Onox happily agrees and spirits Din away in a giant tornado as Link watches on in horror.

At the castle, Onox has imprisoned Din in a crystal as he gloats about Holodrum being in ruins, as his plans to transform Holodrum into a lifeless land of the dead is going smoothly as planned.[13] When she argues that the land will prevail and a hero will rise to defeat him, he boasts about sending Medelock to the sunken Temple of Seasons to stop any potential heroes from opposing him, only to have a Keese interrupt him and report of Medelock's demise.[25][26] At this news, Din snarks that it now seems that it isn't the land that's going to perish, but Onox.[27] This prompts him to angrily swing his ball and chain at the Keese, narrowly missing it, and demand it to relay the message to his troops as soon as possible in order to stop Link from reaching the castle.[28] As the Keese flies off, Onox promises Din that she will be forced to watch Link fall to the power of darkness, as a shadowy silhouette of his true form towers over her crystal.[29]

When Link reaches the castle, he and Onox have a face-off, though this time Link manages to best Onox by slicing off the chest pieces of his armor. In order to account for the sudden change in Link's skill, Onox takes a moment to summon Din and use her as a shield to protect himself from Link's blows.[30][31][32][33] During their fight, Maple returns to assist Link, albeit begrudgingly as it was only her sentient broom that carried her to the castle after she stole the Rod of Seasons from Link while his guard was down. At first, she chastises Link for being on the losing end, but when she learns of Onox's dirty fighting tactics, she changes her tune and calls out Onox for giving evil a bad reputation.[34] When she raises the Rod of Seasons to attack him, she accidentally pulls Din's crystal away from Onox since the rod and Din are drawn to each other. With Din safe, Link is eager to fight Onox until the latter transforms into his true form, a Dark World dragon.[35][36] At first, Link seems to have the upper hand by slicing the gem on Onox's dragon head twice and using Maple's illusions to distract Onox with fake copies of Link, though Onox knocks them both down with a single blast of his fire breath. Once again, Link is protected by one of his companions, this time a baby talking chicken named Piyoko, before Onox can crush him with his claws. However, Onox strikes her down, seemingly to have killed her. As Link weeps over her small body, Onox mocks the boy, prompting Link to lash out in anger and getting himself caught in Onox's claws.[37] Then, Ricky joins the fight and strikes Onox across the chin with one of his tornado punches, forcing him to drop Link and thus freeing the hero from his clutches.

As the three remaining heroes try to coordinate a final attack, the Triforce mark on Link's left hand glows, and it's discovered that Onox is weak to the power of light as he recoils away from it in pain, demanding it to be put out.[38][39] With this revelation in mind, Link calls upon the power of the Triforce and defeats Onox by striking his gem a final time with his sword. But in his final breath, Onox gloats about Link being too late as the Flame of Destruction has already been lit and that it will soon spread across the land.[40][41] After he disintegrates into smoke, Din is set free and the heroes celebrate their triumph. However, the ending reveals Twinrova, Onox's masters, watching over the heroes through their crystal ball, remarking that Onox's deeds had gotten them closer to granting their wish, reviving Ganon.[42]

Onox's name may be a phonic reference to the gem onyx, a hard mineral known for its black variety. His Japanese name, Golgon or, more likely, Gorgon, refers to a same name race of creatures from the Greek myths, a notable member being Medusa who also inspired the boss of Sword & Shield Maze.