Olkin is a character from The Legend of Zelda: Breath of the Wild. He is a Sheikah farmer who lives at Kakariko Village in the region of West Necluda.

Olkin wakes up at 6:00AM and spends the day growing Fortified Pumpkins in his pumpkin patch near his house. If Link approaches him and examines one, he will offer to sell it for 20 Rupees. At 5:00PM he will start to head to his outdoor kitchen for supper, where he claims that his wife's dishes "are the best" and that they are "way better than a barrel o' carrots". at 8:00PM he will jog around Kakariko Village, where it is revealed that he has a bitter rivalry with Steen the Swift Carrot farmer, as he believes that the best offence is a good defence while Olkin thinks opposite When they go hunting together, Steen prefers to kill the prey as soon as possible whilst Olkin prefers to sneak up on the prey, much to Steen's chagrin. This results in Olkin deliberately trampling Steen's farm of Swift Carrots. If Link talks to him and admits he saw it, Olkin will declare that from then on he'll stop taking his anger out on the crops, despite continuing to do so on all other nights. Much later at 4:00AM he goes back to his house and sleeps. If Link is in his house when he arrives home, he will be surprised and ask Link not to scare him again.

Olkin wears traditional Sheikah clothing: A curved hat, resembling an opened book, a navy blue shirt, a light grey jumper with red stripes, tabi socks and Japanese sandals. He has olive coloured eyes, a grey beard and moustache, grey hair and grey eyebrows. The back of his hair is tied into a bun, which is penetrated by red chopsticks.

Olkin shares a house with his wife, Mellie.

Olkin's house, as every other house in Kakariko Village, has a bar-shaped hole cut above the door to let air in with iron bars covering it for security, a Japanese sliding door with the Sheikah symbol on the opaque screen, a thatched roof resembling the Sheikah hat which has a wavy line of wood on top, a small arched window with wooden red cross-shaped muntins across it, wooden beams extending around the house as a decoration, a Japanese paper lantern hanging to the right of the door and six mortar and pestle sets fitted with a brown plank and five rocks. A singular plum tree stands outside the front of his house. The couple also owns a farm of tea plants to the left of their house. An array of straw hats and wooden pestles hang from the back of the house. A stream runs by the back of their house, where the water is lifted into a waterwheel which is the transferred down a wooden halfpipe into a puddle which is used by Steen to water his Swift Carrots. Olkin's Fortified Pumpkin farm resides to the right of the house.

The inside of the house is decorated with black line patterns across the walls in a neat fashion. The house's interior has more space upwards than it has sideways, so the only real room in it is the bedroom. Olkin and Mellie sleep in separate beds separated by a bedside table which has a tea set in the centre, most likely farmed from the plants outside. Above the beds is a fancy wooden beam holding a lantern. A woven bucket of planks sits south of Mellie's bed, most likely to make a similar contraption to Steen's to water his pumpkins. To the right of the entrance is a floor shelf, holding apparent board games and a smaller bucket of planks as well as a jar and small chalkboard, the latter possibly being used for making plans for the contraption. To the left of the entrance is another floor shelf full of boxes and what seem to be Olkin and Mellie's diplomas from passing Sheikah School. Two sun hats are situated by the window of Olkin's bed. 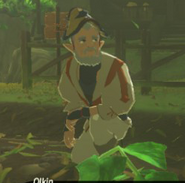 Add a photo to this gallery
Retrieved from "https://zelda.fandom.com/wiki/Olkin?oldid=528779"
Community content is available under CC-BY-SA unless otherwise noted.