Spoiler: The Last King of Hyrule

"IT'S DANGEROUS TO GO ALONE! TAKE THIS."
— Old Man

Old Men are recurring characters in the Legend of Zelda series. They have different purposes in the various games in which they appear and may both help Link in his quest and hinder his progress. This is likely because they are actually different characters to one another.

The Old Man is a bald character with a white beard and is dressed in a red gown. He is usually found in dungeons or inside caves, most commonly standing between two magic flames he controls. When he is found inside a dungeon, attacking the Old Man results in fireballs shooting from the flames. The Old Man is used for several things in the game, ranging from giving Link advice on how to move forward in his adventure to providing him with important items. Though very helpful, they are sometimes unpredictable, occasionally gambling with Link for Rupees and even mugging him. In a few of the Second Quest dungeons, some of them will demand Link to either pay a sum of rupees, or permanently forfeit a Heart Container if he wants to continue through the dungeon. This raises the question on what his true motives are. It is quite likely that the ones that are less helpful to Link are actually different characters to the one who support Link's quest. His female counterpart is the Old Woman.

The most well known location in which he appears is the cave northwest of Origin where he gives Link a sword after saying his infamous quote, "IT'S DANGEROUS TO GO ALONE! TAKE THIS!" thus plays a key role early in Link's adventure as he provides Link with a weapon with which to defend himself.

In the ROM Data for The Legend of Zelda he is often referred to as Abei, but this might only refer to the object holding his data.

Old Men are found in various dungeons and caves throughout both games. Dressed in green robes, they act very similar to their The Legend of Zelda counterpart. Old Men found in caves below trees or rocks on the Overworld will either reward Link with Rupees, telling him not to tell anyone, or thank him for paying to fix his door as he takes Rupees from Link. Several Old Men appear in Eyeglass Isle Library searching for a way to cleanse the poisoned Zora Seas.

Various ghostly old men appear throughout the game to give cryptic advice. 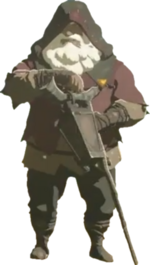 In Breath of the Wild, the Old Man is a character with a white beard and is dressed in a brown cloak. Link encounters him on the Great Plateau sitting near a campfire. He speaks to Link once he picks up the Baked Apple. The Old Man guides Link, he appears again on top of Mount Hylia, where he gives Link the Warm Doublet and teaches him about the pin feature of the Sheikah Slate. After Link completes Keh Namut Shrine, the Old Man tells him about the Sheikah. After having activated the Great Plateau Tower, the Old Man offers the Paraglider allowing Link to leave the Great Plateau. The Old Man lives in the Woodcutter's House where Link can help him remember the recipe to create a Spicy Meat & Seafood Fry and be rewarded with his Warm Doublet.

Later, Link learns the Old Man is the spirit of King Rhoam Bosphoramus Hyrule in disguise, who guided the youth so he can save Zelda. King Rhoam tells Link what occurred during the Great Calamity one hundred years earlier, then advises him to seek out Impa at Kakariko Village. He offers his paraglider to Link in order to leave the Great Plateau, and the quest to defeat Calamity Ganon. Afterwards his spirit leaves and never reappears, but Link can find and read The Old Man's Diary at the Woodcutter's House. In the Library of Hyrule Castle, Link can find the King's Study hidden behind a metal bookcase which contains King Rhoam's Journal giving Link insight into the King's life and his thoughts leading up to the Great Calamity. The journal recalls important events such as his daughter's birth, his wife's sudden death, and his strained relationship with Princess Zelda due to the prophecy foretelling Calamity Ganon's return and Zelda's struggles to awaken her sealing powers. Ultimately King Rhoam resolved to be more supportive of his daughter's ancient technology research but died before he could reconcile with Zelda due to the Great Calamity leading him to become a ghost who watched over Link who was injured as a result of having never taken part in the Sheikah Monks' trials which were intended to train the Hero so he could grow strong enough to combat Calamity Ganon and his forces. Had King Rhoam been more supportive of Zelda's research, then she and the Sheikah may have discovered how to access the shrines sooner and thus Link would have been more prepared to handle the Great Calamity. King Rhoam would later rectify his mistakes by guiding Link to the four Shrines located on the Great Plateau as the Old Man before tasking the Royal Guard Captain with the task of destroying Ganon to save his beloved daughter and restore the kingdom of Hyrule to its former glory.

An old man appears in the top corner of the screen, near the hearts display. He appears to be casting magic but has no effect on the game.

In Link's Awakening, although he does not appear in-game, a series of unused sprites for the Old Man were found in the game's data. The sprite is, aside from being monochrome, identical to the one used in the Oracle games.

The Old Man providing advice in The Legend of Zelda

This is because he sends you to find Zelda in the first place, and in Breath of the Wild he is shown to be the King of Hyrule, what else is there to say? Possibly the Old Woman is the Queen.

Retrieved from "https://zelda.fandom.com/wiki/Old_Man?oldid=537251"
Community content is available under CC-BY-SA unless otherwise noted.