Template:Boss Masked Jungle Warrior: Odolwa is the Boss of Woodfall Temple, who has imprisoned one of the Four Giants, as well as the Deku Princess,[1] within his temple. Odolwa is a giant blade dancer whose body is covered in swirling tattoos, and he wields a humongous sword many times the size of Link himself. If Link is to prevail in his quest, he must defeat Odolwa. Odolwa is also the culprit behind the sad state of Woodfall. 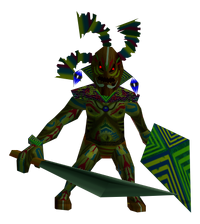 Link enters a dark, octagonal room with a Deku Flower in the middle. As he walks forward, a jungle beat is heard and seconds later, Odolwa lands from the darkness above and prepares to do battle.

Odolwa attacks mostly with his sword, which is extremely versatile due to his long reach, making Link vulnerable as soon as he gets remotely close to Odolwa. Odolwa will also defend himself using a large shield, which makes hitting him more difficult. Odolwa is capable of making a ring of fire appear around Link. He is also capable of summoning moths and other insects, which will attack Link. The spider-like insects can easily be defeated for Recovery Hearts. The moths can be distracted by the lit fuse of a Bomb, which will then blow up and kill them. It is possible for Link to avoid attacks from the moths by putting on the Deku Mask and turning into a Deku Scrub. The moths will simply flutter over Link's head. Odolwa's minions are also vulnerable to his fire.

Partway through the battle, Odolwa will start using a powerful Spin Attack, which can be very difficult for Link to avoid.

To defeat Odolwa, Link can shoot Odolwa with his Bow to stun him, then attack with his sword. Odolwa is capable of deflecting Link's Arrows; he is most vulnerable while he is dancing or attempting to summon insects.

Link can also harm Odolwa in Deku Scrub form by shooting out of the yellow Deku Flower, found in the center of the room. Odolwa is also vulnerable to Bombs or any explosive object, such as the Blast Mask or Bomb Flowers, which can be found along the outside edge of the room.

Once Odolwa has been slain, Link will receive a Heart Container and Odolwa's Remains, freeing the guardian giant of Woodfall.[2] This giant, as thanks for the rescue, will teach the young hero the Oath to Order, the song which calls the Four Giants. Because its deity has been freed, the waters of Woodfall will no longer be poisonous.

After defeating Odolwa, Link will be deposited near the exit of Woodfall Temple. It is in this room that Link will find the Deku Princess, who he can bring home to Deku Palace in a Bottle.[3][4] Rescuing the Deku Princess is not required to complete the game, although it is required to obtain the Mask of Scents.