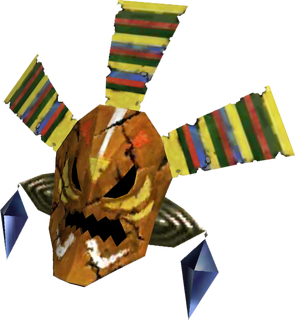 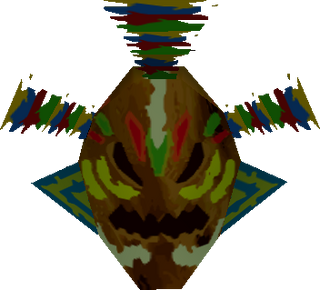 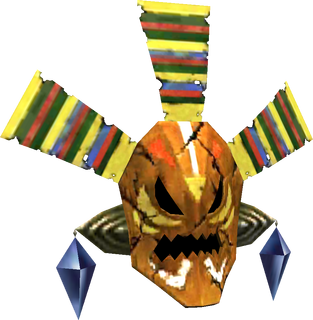 Instant access to the Boss room
Odolwa's Remains are an item in Majora's Mask.[1]

Odolwa is the masked jungle warrior Boss of Woodfall Temple.[2] When Link cleanses the Temple for the first time and acquires Odolwa's Remains, the first Guardian Deity is freed from its captivity and meets Link in the Chamber of Giants,[3] where it teaches him the "Oath to Order".[4] The Remains allow Link to Warp directly to the Boss room from the Temple's entrance.[5] In Majora's Mask 3D, Odolwa's Remains are not required for this; simply challenging Odolwa once will activate the Portal so Link can try again without having to go back through the Dungeon.

Odolwa's Remains are worn by one of the Moon Children. They can also be seen hanging on one of the walls of the Boss chamber inside the Moon during the battle against Majora's Mask. The Remains eventually detach from the wall and attack Link by shooting energy at him. They can be destroyed with any weapon.

Odolwa's Remains appear as a Costume for Ganondorf in the Majora's Mask DLC pack in Hyrule Warriors.