Zelda Wiki
Register
Don't have an account?
Sign In
Advertisement
in: Locations in Spirit Tracks, Dungeons, Temples,
and 2 more

Not to be confused with the Palace on the Sea in The Adventure of Link or the Temple of the Ocean King in Phantom Hourglass'. 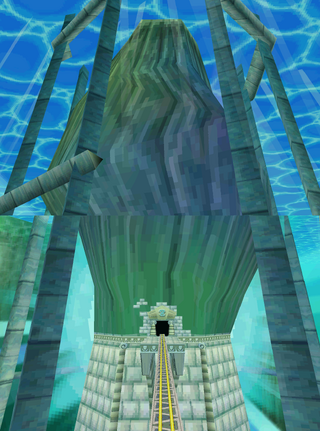 Ocean Temple guide
at StrategyWiki
The Ocean Temple is the third Dungeon in Spirit Tracks.[1]

After repairing the bridge that leads from the Forest Realm to the Ocean Realm, done by finding the Ocean Rail Map in the Tower of Spirits, Link is able to meet with the Realm's guardian Lokomo, Carben, and together, they are able to restore the bulk of the realm's lost Spirit Tracks in order for Link to reach the Ocean Temple and investigate the disturbance with the temple's energy flow to the Tower of Spirits. Traveling around the Ocean Realm, Link activates three special crystal switches with the sound of his train whistle, opening the gateway that leads to the Ocean Floor and thus the underwater entrance of the Ocean Temple. Battling two evil trains (an Armored Train and a Dark Train) and a multitude of Octoroks, Link is eventually able to reach the Ocean Temple's entrance.

Contrary to its name and location, the temple is actually devoid of water, except in the entrance area and the boss arena, making it similar in this aspect to Hyrule Castle in The Wind Waker and Misery Mire in A Link to the Past, as both places are dry despite being located underwater. After battling a Snapper, Link discovers the temple's main treasure, the Whip, which ultimately proves to be invaluable as he continues his exploration of the temple in search of the cause of the temple's disturbance.

Working his way into the upper levels of the temple, Link eventually discovers the Boss Key and is able to get it to the Boss door, thus unlocking the passageway leading to the temple's top where the energy beacon can be found. The part of the temple above the surface shows a small portion of the cylindrical top of the temple rising above the surface and surrounded by a circular infrastructure of stone. Finally Link finds his way to the roof of the temple and discovers the Barbed Menace Phytops. Using the Whip, Link is able to destroy the immense plant and reclaim the temple's stolen Force Gem, restoring it to the temple's energy beacon resting in Phytops's pool and thus restoring the energy flow between the temple and the Tower of Spirits.

Notably, the Stamp Station is more difficult to collect in this temple than in the others. Link must discover a hidden room north of the second floor using Bombs, then use the boomerang in the eastern side of this room to activate a switch, and then the whip to reach the stamp's spot in the western side.

After Link beats the Fire Temple and previously transports Ferrus from a part of the Snow Realm (next to the Snow Temple) to Aboda Village, he is asked (through a letter) to transport him here from a part of the Fire Realm (next to the Fire Temple). Upon doing so, Link is rewarded with a Force Gem that activates some rails leading to the secret Dark Ore Mine in the aforementioned Fire Realm.

Some time later, Ferrus sends a letter to Link saying that he managed to find a Regal Ring during his expedition within the temple. Link can then visit him on a part of the Forest Realm (next to the Forest Temple) to receive the ring. Ferrus then goes to his home at Wellspring Station and stays there during the rest of the game.