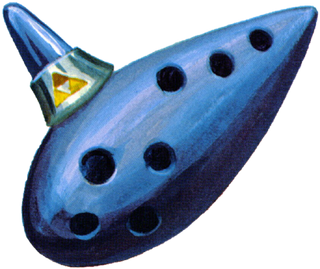 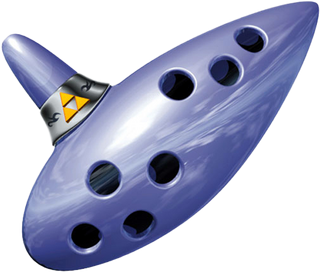 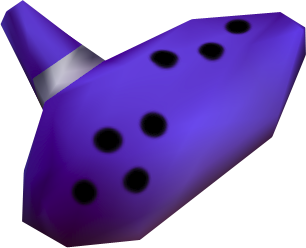 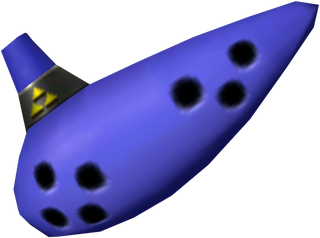 Fairy Ocarina
Ocarina
Recorder
Goddess's Harp
Wind Waker
The Ocarina of Time is a recurring Item in The Legend of Zelda series.[citation needed] It is an instrument Link uses to play Music. It is a transverse ocarina (also known as a "sweet potato ocarina").

The Ocarina of Time's origins are unknown, since its history is only briefly spoken of in Ocarina of Time. Princess Zelda mentions that the sacred instrument has been secretly passed down for generations within the Royal Family of Hyrule, kept safe from those who would exploit its power to cause others harm.[1][2] As such, it is a treasured heirloom of the Royal Family and will only be given to the one who will open the Door of Time to retrieve the Master Sword. Full of endless mysterious powers, the Ocarina of Time proves to be a magical instrument that serves many hidden purposes which only a selected few can truly uncover.

Playing the Ocarina of Time

The Ocarina of Time can be equipped to any of the three available C-Buttons. By pressing the C-Button that it is set to, the A and all four C Buttons can be used to produce a different note. The Control Stick as well as the Z and R Buttons can be used to change the pitch of the notes, with the exception of tilting the Control Stick left or right, which causes Link to use vibrato on the Ocarina, which has no specific usage in-game.

In Ocarina of Time 3D and Majora's Mask 3D, the Ocarina is played with the 3DS's L, R, A, X, and Y buttons, and is permanently assigned to a button on the bottom-left corner of the touch screen, eliminating the need to assign it to one of the other buttons. When playing the Ocarina, visuals of the 3DS's buttons also appear on the touch screen, and light up as said buttons are pressed. A sub-menu detailing the songs Link has learned can also be brought up, allowing him to see the notes he wishes to play.

The instructions to change the pitches of the Ocarina of Time notes are as follows:

The Ocarina of Time is first introduced when young Link meets Princess Zelda in the Castle Courtyard in Ocarina of Time. After the young hero shows her the Spiritual Stone of the Forest, the Kokiri's Emerald, the young princess entrusts Link with the secret tale of the Sacred Realm that has been passed down for generations by the Royal Family.[3] Princess Zelda tells how the only way the Sacred Realm can be accessed in Hyrule is by entering through the Temple of Time; however, its entrance is sealed by a stone wall called the Door of Time that can only be opened by collecting the three Spiritual Stones and playing the "Song of Time" on the mystical instrument known as the Ocarina of Time.[4] Princess Zelda goes on to tell how the Ganondorf, the King of the Gerudo, is trying to reach the Sacred Realm and retrieve the Triforce from within and use it to conquer the entire world.[5] As such, the princess promises to protect the Ocarina of Time with all her power while Link collects the two remaining Spiritual Stones in order to obtain the Triforce before Ganondorf does and defeat him with its power.[6]

Once Link gathers all three of the Spiritual Stones, he returns to Hyrule Castle just at the right time to witness Impa and Princess Zelda fleeing from Ganondorf's pursuit by horseback. Zelda notices Link and throws the Ocarina of Time in a desperate attempt, which falls into a moat near the bridge. After briefly confronting the King of the Gerudo, Link retrieves the Ocarina from the water, causing him to instantly have a vision of Princess Zelda in the Temple of Time.[7] Zelda manages to send a telepathic message to the young hero informing him that she could not wait any longer for his return and leaves him with the magical melody known as the "Song of Time", which opens the Door of Time.[8] With the Ocarina of Time and the Song of Time in hand, Link opens the path to the Sacred Realm, unwittingly allowing Ganondorf to sneak in and touch the Triforce, which ultimately causes it to break into three separate pieces.[9]

After Link awakens as an adult and the proclaimed Hero of Time, the Ocarina of Time becomes an even more crucial item in the game. Link uses it mainly to easily Warp to different selected areas by playing special melodies taught to him by the mysterious Sheik. These songs serve as quick shortcuts to accessing the temples, and two of the songs, the "Nocturne of Shadow" and the "Requiem of Spirit", are necessary to enter their respective temples. Moreover, just like the Fairy Ocarina, the Ocarina of Time is used extensively to solve an abundant amount of puzzles, such as raising or lowering the water levels of the Water Temple, drying up the Kakariko Village well, and even gaining access to Zora's Domain.

The Ocarina of Time also helps Link regain the seven years he lost as a cause of drawing the Master Sword from its pedestal. At the end of the game, after Ganon has been defeated and Link and Zelda are talking in the sky, the princess asks that the young hero gives back the Ocarina. By using Zelda's powers as a Sage, she can return Link to his original time with the help of the Ocarina of Time.[10] The sacred instrument is last used in the game as the princess plays "Zelda's Lullaby" to send the Hero of Time back to his childhood.

Songs in Ocarina of Time 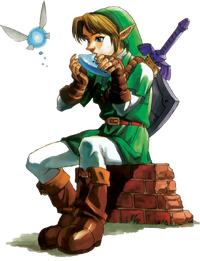 Adult Link playing the Ocarina of Time with Navi

The various Ocarina melodies found in Ocarina of Time are listed below, along with a brief description of their effects.

In Majora's Mask, before Link departs the land of Hyrule, Princess Zelda gives the Ocarina of Time to Link as a memento of the time they spent together.[11] She also teaches Link the "Song of Time", a melody that holds a special meaning to her,[12] before handing over the Ocarina, mentioning that he should play that melody if something were to happen to him.[13] With this said, Link leaves Hyrule along with Epona to embark on a journey in search of Navi, his invaluable friend.[14]

During Link's search, he is ambushed by the Skull Kid and his two Fairy companions, Tatl and Tael. The Skull Kid takes the opportunity that Link is knocked unconscious to search through his belongings and comes across the Ocarina of Time.[15] The young hero wakes up and catches the little imp red-handed, but just as Link is about to grab back his Ocarina, the Skull Kid jumps on Epona and rides away with Link holding onto his horse. A series of events happen, and Link is transformed into a Deku Scrub by the power of Majora's Mask as he stumbles into the parallel world of Hyrule, Termina. Once Link and Tatl reach the Clock Tower, they encounter a mysterious man known as the Happy Mask Salesman who knows of a way to return Link back to his original form: if Link can retrieve the Ocarina of Time, he will return him to normal.[16] For the next 72 hours, Link and Tatl try to find a way to encounter the Skull Kid again and get back the Ocarina from him while the Moon above them threatens to crash into Clock Town.

On the eve of the Carnival of Time, the young hero and his Fairy companion face off the Skull Kid atop the Clock Tower. Link shoots a Bubble Blast to knock the Ocarina of Time out of the imp's hands, and just as Link retrieves it, he has a flashback of him and Zelda just before leaving Hyrule.[17] Link remembers the "Song of Time" that the princess taught him, which he uses to return to the dawn of the First Day before the Moon crashes onto Termina.

Just like in its predecessor, the Ocarina of Time plays a prominent role in Majora's Mask. Link must use the Ocarina and the "Song of Time" to reset the land's three-day cycle and relive the same three days until the Four Giants are freed from their curse, so that they can stop the Moon from destroying Termina. The sacred instrument is also used to solve various puzzles in the game, such as awakening Captain Keeta, recovering Lulu's voice, and healing the many tormented souls to turn them into Masks.

The Ocarina of Time takes different forms depending on the transformation mask that Link is wearing at the time. As Deku Link, the Ocarina takes the shape of Pipes known as the Deku Pipes, Goron Link uses the Goron Drums, and Zora Link plays the Zora Guitar. All of these instruments have the same power as the Ocarina of Time; however, some songs will only have the desired effect by playing with a certain instrument.

The various Ocarina melodies found in Majora's Mask are listed below, along with a brief description of their effects.

The Ocarina of Time can be created in Scribblenauts Unlimited, but it goes under Ocarina when being written. If the Ocarina is given to Link, he will play the first half of "Epona's Song", and Epona will appear.

In Hyrule Warriors, Link can be seen playing the Ocarina of Time, performing "Epona's Song" during the victory animation with the Horse weapon. In the Majora's Mask DLC pack, Young Link uses the Ocarina of Time as his base Strong Attack, to exchange his filled Special Attack Meters to fill his Magic Meter.

In the Termina Map, the Song of Time and Inverted Song of Time Item Cards are represented by the Ocarina of Time.