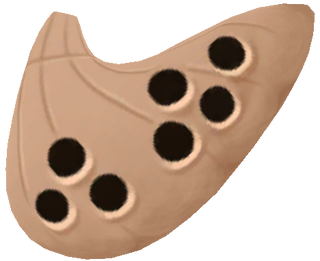 A Link to the Past
Link's Awakening

The Flute once belonged to the Flute Boy in A Link to the Past. The Flute Boy set out in search of the Golden Power and never returned. When Link talks to the boy in the Dark World, he gives the young hero a Shovel and asks him to find his Flute. Link finds this instrument buried in the Haunted Grove in the Light World. He then plays the Flute one last time for the boy, who is soothed by the music and is then turned into a Tree.

When Link brings the Flute to the Man in Tavern, the Man understands what has happened to his son and asks Link to keep it. He then tells Link to play the Flute in front of the Weathercock in the center of Kakariko Village. Soon after Link complies with his request, the Flute Boy's Bird breaks out of the Weathercock and flies off. Whenever Link plays the Flute in the Light World from that point forward, the pet Bird can transport him to one of eight locations. The Flute is necessary in reaching the sixth Dark World dungeon, the Misery Mire.

While the Flute Boy's Bird does not appear when playing the Flute in the Dark World, somehow it appears in it when Link plays the Flute after defeating Agahnim on the top of Ganon's Tower.

The Ocarina can be found in the Dream Shrine in Link's Awakening, which can only be completed if Link has the Power Bracelet and the Pegasus Boots. The Ocarina can be used to play "Manbo's Mambo", "Frog's Song of Soul", and the "Ballad of the Wind Fish".

In the Link's Awakening manga by Ataru Cagiva, Link receives an Ocarina from Madam MeowMeow after rescuing BowWow in volume 1. According to her, it has been passed down through her family for ages and has mysterious powers. When visiting Marin at Toronbo Shores, Link plays with her the "Ballad of the Wind Fish" with the Ocarina.

The Ocarina can be found in Level-4 in BS The Legend of Zelda. It can be used to Warp to other Dungeons. When the Ocarina is played on a pad near the eastern shore, Level-6 will appear.

The Ocarina is a class of Weapon used by the Skull Kid in Hyrule Warriors. It is associated with Darkness. Skull Kid plays the Ocarina to coordinate attacks between Tatl, Tael, and himself. He can transform it into a trumpet to summon and control Puppets from Twilight Princess to attack on his behalf.

In Hyrule Warriors Legends, a golden Ocarina can be obtained from a Treasure Chest in the middle of the Deku Tree Keep during the Legend Mode Scenario, "The Sorceress of the Woods". The Ocarina allows Warriors to warp to any active Owl Statues in a Stage.[2] When the Ocarina is used, the Warrior plays the "Ballad of Gales" to summon a cyclone that warps them to the selected Owl Statue.

In Hyrule Warriors Legends and Hyrule Warriors: Definitive Edition, the fourth form of the Ocarina is the Crackling Ocarina, which is associated with both the Elements of Darkness and Lightning.

Against Captains and Warriors, Skull Kid summons a Puppet behind them. It then rapidly attacks the target by flailing its arms until Skull Kid comes up and finishes off with an energy attack. Against Giant Bosses, Skull Kid uppercuts the monster with Tatl and Tael and then strikes it down while surrounded in a dark barrier.

Within a frontal radius, Skull Kid uses the dark magic of Majora's Mask and rattles his head while a large magic circle appears. Enemies are drawn into the circle and are rapidly damaged. Skull Kid then ends the attack with an energy burst.

Upon activation, Skull Kid stomps the ground in anger, bursting in dark energy. The Focus Spirit Attack has Skull Kid kick a miniature Moon into the air before kicking it again at the enemies in front of him. He then mockingly spanks his behind at them afterwards. When the Focus Spirit gauge is depleted, Skull Kid holds his head and squirms violently until dark power is unleashed, damaging enemies around him.