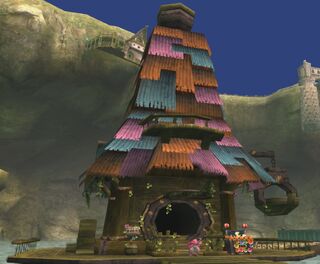 10 Rupees (first time free)
The Oasis Flight is a service in Twilight Princess.[1]

The Oasis Flight is an amusement ride that Fyer offers to Link in Lake Hylia.[2] It houses a Cannon under its roof that can launch Link to various places. Once Link enters it, the door shuts behind him and Fyer operates a crank, setting the direction that Link will be shot.

Until Link presents Auru's Memo to Fyer,[3][4] the Cannon only launches him to the Flight-by-Fowl game area, which also counts as the only way back to the mainland from Lake Hylia besides transportation via the Kargarok, Plumm's mini-game, and Midna's Warping ability. Link receives his initial ride for free,[5][6] but it will cost him 10 Rupees for every ride after that. The free ride launches Link into the southern edge of the Gerudo Desert.