Not to be confused with Nyave. 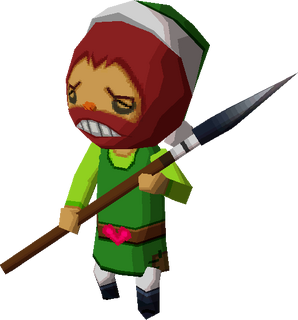 Nyeve is a character in Phantom Hourglass.[2]

Nyeve can be found in the northwest quadrant, sailing the Prince of Red Lions. His outfit is almost exactly like Link's, except with a small white ball at the end of the cap, a heart-shaped belt buckle, blue boots rather than brown boots, and a garden tool for a weapon. He is a middle-aged man, with red hair that connects to his beard. His brother is Nyave, a member of the maritime defense force who sails the southwestern sea in a Traveler's Ship.

Nyeve runs a combat minigame. If Link can hit him 100 times, he is rewarded with a Heart Container. Scoring between 100 and 199 rewards Link with a Treasure. A score above 200 rewards him with Ship Parts. This can be repeated anytime by simply talking to Nyeve.

Nyeve is part of the game's trading sequence. After giving him the Hero's New Clothes, Nyeve gives Link a Kaleidoscope. The Kaleidoscope is traded to the Ho Ho Tribe in the bottom left corner of the ship in the Southwestern Sea.