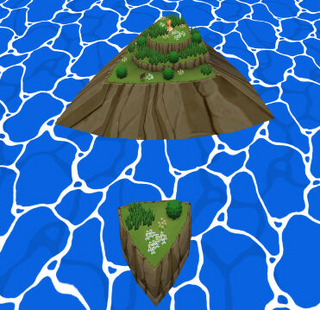 Northern Triangle Island is a location in The Wind Waker.[1]

Northern Triangle Island is an Island of the Great Sea, located on square C4 to the south of Windfall Island. It is part of a trio of triangle-shaped Islands that in turn form the inner part of a Triforce when lines are drawn on a map connecting each in conjunction with the Islands that house the Goddess Pearls.

The location of Northern Triangle Island is strategic as a Statue depicting the Golden Goddess Din awaits the placement of Din's Pearl. When Link approaches the Statue while holding Din's Pearl, the Statue's eyes glows a reddish hue and it prompts him to place the Pearl in its hands.[2][3] Afterwards, it will continue to glow until all three Goddess Pearls have been placed in their respective Statue's hands, at which point they will come to life and emit beacons toward the other Triangle Islands. This raises the Tower of the Gods from the Great Sea.[4]

Link can also use the Treasure Chart he receives from Six-Eye Reef to obtain the Big Octo Chart here. It is one of the Islands, along with Shark Island and Mother and Child Isles, where Cyclones rage until Link defeats Cyclos.