Zelda Wiki
Register
Don't have an account?
Sign In
Advertisement
in: Locations, Locations in Oracle of Seasons
English 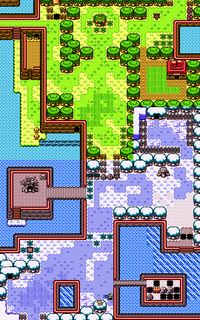 North Horon is a location in Oracle of Seasons.[1] It holds a lake known as Eyeglass Lake, along with Gnarled Root Dungeon. When Link is transported to Holodrum by the Triforce, he awakens in North Horon, making it the first location seen in the game. Link meets Din and the Troupe of Performers here. Soon after, he witnesses the capture of the Oracle of Seasons by General Onox. In a Linked Game, the young hero also meets Princess Zelda here for the first time after saving her from the Great Moblin.

North Horon consists of a southern section and a northern section. The two sections are divided by a narrow path that is blocked by a boulder. Once Link obtains the Power Bracelet from the second dungeon, Snake's Remains, he can lift the boulder and thus gain access to the upper region of North Horon. Being in the very center of Holodrum, Link passes through this area repeatedly during his quest.

The two regions are treated as separate areas because the seasons change when Link travels from one to the other. Consequentially, using the tree stump located in the southern region will have no effect on the northern region; the seasons will revert to spring as soon as he enters it.

At the beginning of the game, Link can only navigate the southern portion of North Horon. Its most notable landmarks are the Gnarled Root Dungeon and Eyeglass Lake. There are also two homes made from hollowed trees in this region. The first—just north of Horon Village—belongs to Impa. A patch of Soil can be found near her home. A second home enclosed by a fence belongs to Malon and Talon and their Cuccos. Nearby is the tree stump where Link meets Din at the beginning of the game. This is the only stump in North Horon, excluding the one at Eyeglass Lake.

The Old Man who gives Link the task of finding the Golden Monsters also lives in this area in a cave beneath the riverbed. In the summer, the warm weather causes the water surrounding Gnarled Root Dungeon to recede, revealing a staircase to the Old Man's hidden cave.

Winter is the default season in this part of North Horon.

The upper region of North Horon is significant as its exits grant access to the northern mountains and most of western Holodrum, including Holodrum Plain and Spool Swamp. Blaino's gym is found here, as well as a Scent Tree, so Link can warp to the area using Gale Seeds. On the western edge of the area there is a plateau by the water that can by climbed in summer, when there are vines growing. Atop the plateau there are two saplings: burning the one on the right reveals a staircase leading down to another Old Man's hidden abode. He gives Link 200 Rupees to keep it a secret. South of the plateau is an entrance to a watery cave blocked by Rock Mushrooms that can be picked in autumn. Inside the cave is a Treasure Chest containing the Quicksand Ring.

Upon entering North Horon after completing Snake's Remains in a Linked Game, a worried Impa informs Link that Princess Zelda has left Hyrule Castle and is coming to Holodrum without any guard.[2] She implores Link to help find the princess and has him search up north while she looks in town.[3] Link stumbles upon the princess just as she is about to be mugged by the Great Moblin and his minions.[4] After he fights off the Moblins, Zelda thanks Link for saving her and gives him the Blue Joy Ring,[5][6] then heads off with Impa to her refuge.[7]

Spring is the default season in this part of North Horon. Since the tree stump in the southern region has no effect on the northern region, Link must use the stump all the way at the south end of Holodrum Plain to change the seasons in this area. Using this stump equally affects all Holodrum Plain and the northern section of North Horon, as these two are not treated as separate regions.