Please improve it as you see fit. Editing help is available.
This article has been flagged since October 2010. 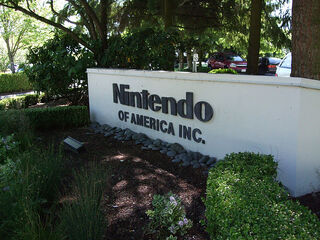 The Nintendo of America headquarters.

The Legend of Zelda series

www.nintendo.com
Nintendo of America, Incorporated is the North American branch of the Nintendo Co. Ltd headquarters in the Japanese city of Kyoto. It is responsible for operations in the western hemisphere and the facilitating the 40% of American households where Nintendo game consoles reside. Its president and chief operating officer is Doug Bowser.

Nintendo of America was established in 1980 as a wholly owned subsidiary in New York. Two years later, they moved to the city of Seattle with a total capital of $600,000. NoA headquarters is now established in 4600 150th Ave NE Redmond, Washington and has realized a significant growth since its entry to North America. It has distribution centers in Atlanta, Georgia (Nintendo Atlanta) and North Bend, Washington (Nintendo North Bend).[1]

Nintendo in The Legend of Zelda series
Community content is available under GNU Free Documentation License unless otherwise noted.
Advertisement