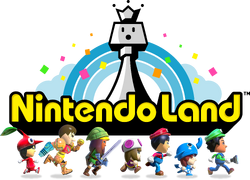 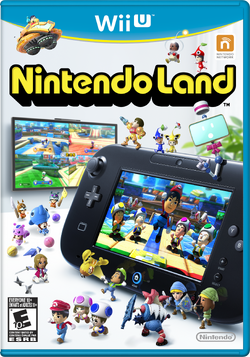 Mario Chase involves a Wii U GamePad-using Mii dressed as Mario trying to catch up to four Wii Remote-holding Miis dressed as Toads.

Yoshi's Fruit Cart is a minigame that requires a path to be drawn for a Mii on a Yoshi Cart to complete each course. However, only the view of the course displayed on the TV screen shows fruit that must be collected and obstacles that must be avoided along the way to the goal.

Luigi's Ghost Mansion is based on Luigi's Mansion. Players can either play as human or as a ghost. There are 4 human characters armed with flash lights who are controlled by the Wii Remote while only 1 ghost character that is controlled by the Wii U GamePad. The goal of the game is to either capture the humans if you are the ghost or shine the flash light on the ghost if you are a human.[1]

Donkey Kong's Crash Course is a single player attraction based on the Donkey Kong series. The player uses the Wii U GamePad to control a fragile cart through a maze, which is reminiscent of the original arcade game. The goal of the attraction is to reach the bottom of the screen and move on to the next stage.[2]

The Legend of Zelda: Battle Quest

The Battle Quest attraction is inspired by The Legend of Zelda series. The basic premise of the game is to navigate through various enemies in order to reach the end of the level and be victorious against a boss. Players can play as 1 of 3 sword wielding characters using the Wii Remote while only 1 can play as the archer using the Wii U GamePad. Each player will wear a different color tunic. These colors being green, blue, red, and yellow, which replaces purple.

Based on the Metroid series, a Mii dressed as Samus Aran using a Wii Remote and Nunchuck must shoot down a Wii U GamePad-using Mii piloting Samus' Gunship, or vice versa.

In Pikmin Adventure, the Wii U GamePad is used to control a Leader (presumably Olimar), while the Red, Blue, Yellow and White Pikmin-dressed Miis are controlled with 4 other Wii Remotes.

Animal Crossing: Sweet Day takes inspiration from the Animal Crossing franchise. The game takes place in a candy orchard where 2 guards, controlled via 1 Wii U GamePad, are tasked with keeping 4 animals, controlled via 4 Wii Remotes, from stealing candy. The goal for the guards is to capture the animals 3 times while the goal for the animals is to steal 50 pieces of candy.[3]

Balloon Trip Breeze is very similar to the Balloon Trip mode of the NES game, Balloon Fight. A Mii dressed as Balloon Fighter must reach the end of each course by flapping through the sky, avoiding obstacles.

Octopus Dance is based on the Game & Watch game, Octopus. The player must memorize the moves of the character on the TV screen, and repeat them using either the control sticks or the gyro sensor.

The Takamaru's Ninja Castle attraction features characters from a Famicom game called Nazo no Murasame-jō. The game allows a single player to use the Wii U GamePad as a launcher for shuriken. The goal is to take out various hoards of enemy ninja that come in ever growing groups. The player simply has to swipe their finger across the GamePad screen to toss a shuriken.[4]

The Jukebox plays a variety of songs from The Legend of Zelda series, including an adaptation of Saria's Song, as well as the theme of the Dark World from A Link to the Past and the Gerudo Valley theme from Ocarina of Time.