Zelda Wiki
Register
Don't have an account?
Sign In
Advertisement
in: Locations, Side Quests, Locations in The Wind Waker,
and 3 more

This article is about the location in The Wind Waker. For other articles, see Gallery (Disambiguation). 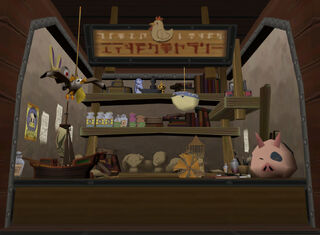 The Nintendo Gallery is a location in The Wind Waker.

The Nintendo Gallery is located on a tall, cylindrical island near the Forest Haven. It can be opened by hitting a Switch in the main island with a Seagull. The Gallery is run by Carlov, who will carve a Figurine of every enemy and character in the game. After the entrance to the Nintendo Gallery is opened, Manny, who is seen outside of the Gallery before it is opened, will appear next to the main desk, and sometimes inside the rooms looking at the Figurines. To request a Figurine, Link must show him a color Pictograph of the subject. Carlov will only accept Pictographs which display a significant amount of the subject's body and which show the subject facing the Picto Box. After Carlov approves the Pictograph, he will complete the requested Figurine in a day. Link can use the "Song of Passing" to advance time and speed up this process. Certain characters, such as the Fairy Queen, cannot be pictographed, so Link can purchase Legendary Pictographs of them from Lenzo on Windfall Island.

Some characters and bosses appear one time only, making it possible to leave the Nintendo Gallery incomplete. However, it can be completed during a Second Quest, where the Deluxe Picto Box is available from the beginning and all the Figurines from the previous playthrough are still in it. It is possible to complete the Nintendo Gallery on the first playthrough, as Carlov will accept the Pictograph of the Gohma rematch in Ganon's Tower. This is the only Pictograph missed before the Deluxe Picto Box can be obtained.

In The Wind Waker HD, the Picto Box can hold 12 Pictographs instead of three, plus a golden Carlov icon will appear on a Pictograph that can be used to make a Figurine. Also, Carlov can now make up to 12 Figurines per day, as opposed to only one. As the Deluxe Picto Box is obtained much earlier, it is also possible to take Pictographs of characters and enemies sooner than previously; such as Gohma's, thus eliminating the need to take its Pictograph at Ganon's Tower. Additionally, Pictographs found in a Tingle Bottle can be saved into the Picto Box, making it possible to obtain Figurines of subjects that were previously missed. The Knuckle Figurine is also needed to complete the Gallery, unlike the original game.[1]