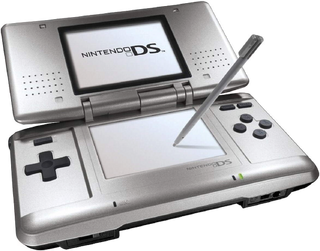 Nintendo 3DS
The Nintendo DS (ニンテンドーDS, Nintendō Dīesu) is a Nintendo handheld console and the successor to the Game Boy Advance.

The Nintendo DS features two screens, one of which is a touch screen, a built-in microphone, and wireless capabilities allowing for multiplayer games and applications. The console is also backwards compatible with the Game Boy Advance.

The Nintendo DS Lite features a slimmer and more lightweight design, and a brighter screen. A special limited edition DS Lite bundle was released both in North America and Europe, each one including a copy of Phantom Hourglass and a Zelda-themed console. The North American version included a golden console with the Triforce, and the European version a silver console with the game logo and artwork of Link and Ciela. The European edition was limited to 1,000 copies.

The Nintendo DSi features a larger but thinner design. It also features two digital cameras, a SD card slot, and an online shop. The console is also no longer backwards compatible with the Game Boy Advance. On November 21, 2009, a larger version of the console, named Nintendo DSi XL, was also released.

Due to the backwards compatibility, the console is also able to play the Classic NES Series versions of The Legend of Zelda and The Adventure of Link, as well as A Link to the Past & Four Swords and The Minish Cap.