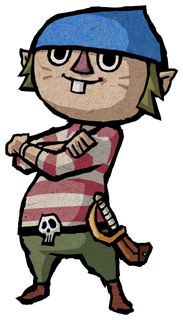 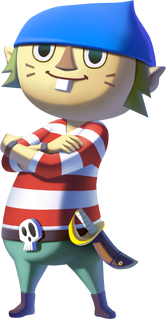 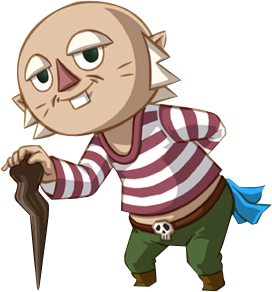 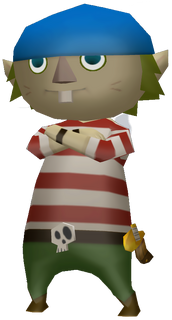 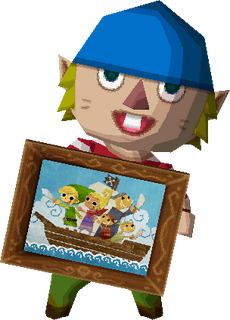 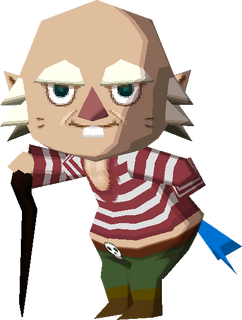 Niko is a recurring character in The Legend of Zelda series.[3] He is a member of Tetra's Pirate Crew. He is the skivvy and the lowest-ranking crew member on board Tetra's Ship, often having to deal with humiliating tasks like washing the dirty underpants of the rest of the pirates.[4] Any new member aboard Tetra's pirate ship has to report to Niko for duty.[5]

In The Wind Waker, Niko enthusiastically befriends Link when he is reluctantly cast below the decks for a journey to the Forsaken Fortress; as with Link's presence, Niko himself no longer had the worst reputation aboard the ship.[4] Niko's notorious incompetence leads him to be outwitted by Link on several occasions, handing over important treasures to the hero as rewards for completing his challenges. When Link first meets Niko, the young pirate gives him a test which all new pirate swabbies must take, which is to swing from platform to platform using Ropes hanging from the ceiling and reach the other end of the ship.[6] Niko is confident that it will take Link at least a year to successfully complete the test, but is astounded when the young hero easily finishes the trial.[7] For his great skills, Niko bestows upon Link the Spoils Bag, and tells the young hero that he is proud to have him as his underling.[8]

Later, when Link visits Windfall Island to find out what the pirates are up to, the young hero finds Niko stuck looking out for the pirate ship while the rest of the pirates are out having fun.[9] He mentions that he is happy to see his "old swabbie" again, and gives him another test similar to the one he took first, except this time there are no platforms in which Link can step on to and must swing directly from Rope to Rope to the other side.[10] Once Link successfully finishes the trial, Niko will once again be amazed (especially since that's a test he hadn't even passed himself) and hand him over some of the Bombs that they acquired from the Bomb Shop, although somewhat reluctantly since he's afraid he might get caught.[11]

In one of the Letters that Aryll writes to Link later on in the game, she mentions how Niko seems sad that Link is not around anymore, and asks whether they used to be good friends.[2]

Niko makes a final appearance in The Wind Waker during the game's ending. After Link and Tetra resurface from the sunken Hyrule Castle, Niko, along with the rest of the pirate crew and a few other character, greet the pair aboard their pirate ship. Gonzo is then seen steering the ship as Link, Tetra, and the gang of pirates set sail from Outset Island in search of new lands.

Like the rest of the pirates, Niko bears a striking resemble to a man portrayed in a wall painting hanging in the sunken Hyrule Castle, which heavily hints that the man could be Niko's ancestor serving under the orders of a past Princess Zelda.

In Phantom Hourglass, Niko recounts the events of The Wind Waker during the game's introduction before the Ghost Ship appears; however, Niko's role is severely limited in the game and only makes an appearance during the opening and closing sequences of the game. He is last seen when Tetra and Link reunite with the rest of the pirate crew. He is fond of his paper cutouts,[12] a character traits that he retains in Spirit Tracks.

Niko makes an appearance in Spirit Tracks as presumably one of the few, if not the only, surviving founders of the new Hyrule. In this game, which takes place 100 years after The Wind Waker and Phantom Hourglass, he appears as an old man who keeps pictures and memorabilia from his pirating days in his home. He narrates the opening cutscene of the game, just as he did at the opening of Phantom Hourglass. Later on, he gives Link the Stamp Book after musing about how Link looks like an old friend of his. By putting ten stamps in the book, Niko will give Link the Shield of Antiquity, which he claims used to belong to a friend of his.[13] By putting fifteen stamps in the book, Link can switch back and forth between his Engineer's Clothes or Recruit Uniform at any time by speaking with Niko. By putting twenty stamps in the book, Link receives a scroll allowing him to use the Great Spin.

Niko is first shown in the Phantom Hourglass manga by Akira Himekawa as Tetra and Link duel each other. Niko shows concern,[14] although Gonzo says they need their exercise.[15] When it is announced that the crew will be entering the Ghost Ship's territory, Niko exclaims that he is afraid of ghosts.[16] Link comforts him, saying that the ocean is protected by the Ocean King.[17] As Link and Tetra continue their fight, Link accidentally cuts the pirate captain's scarf, resulting in it falling into the sea. Link undresses to dive after the scarf,[18] Niko covering his lower area with a mop. Tetra tells Link to not be ridiculous, as the safety of her crew is more important.[19] In tears, Niko and his fellow pirates agree with her.[20] Niko expresses fear when the Ghost Ship approaches.[21] Tetra tells him to show some spine, saying that she will the prove it is not really a Ghost Ship.[22] The young captain boards the Ghost Ship, but is captured. Link follows Tetra, Niko shouting at the hero.[23]

At the end of the manga, Tetra and Link reappear on the pirate ship. Niko greets the captain, asking what the Ghost Ship was like and if there was any treasure.[24] Tetra angrily scolds Niko and the pirates for not coming to her rescue, asking why they didn't come to her aid.[25] Confused, Niko says that it had only been ten minutes since Tetra boarded the Ghost Ship.[26]