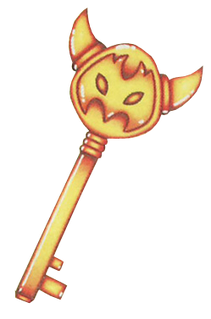 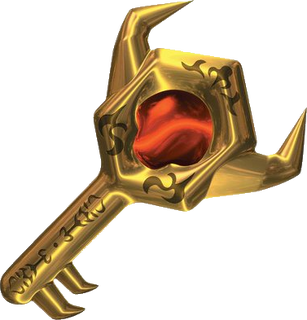 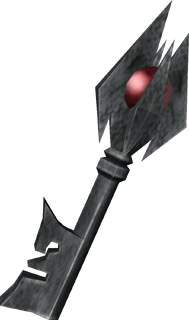 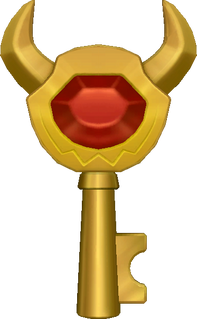 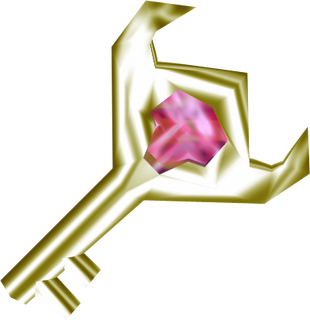 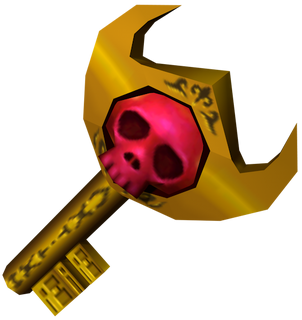 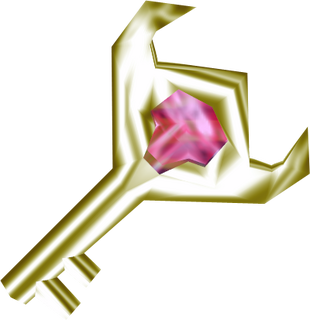 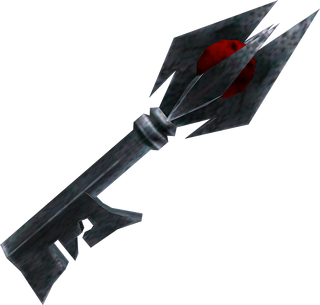 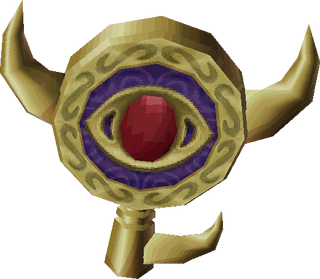 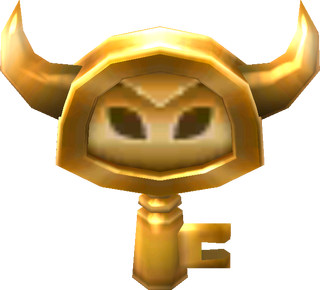 Big Keys are one of the three standard dungeon items, the other two being the Compass and the Dungeon Map. They are generally harder to find than Small Keys and are used to open the big door leading to the Boss' chamber. Big Keys can sometimes be used for purposes other than entering the Boss Rooms.

In addition to opening doors, Big Keys are also used to open the Treasure Chests containing a dungeon's item in A Link to the Past. Doors unlocked by the Big Key may not necessarily lead directly to the boss.

Boss Keys are always found in large Treasure Chests that have yellow and blue designs in Ocarina of Time. This iteration only opens the door to that dungeons Boss.

Functionally, the Boss Keys are the exact same as its predecessor, the same chest and all. This iteration has a pattern of the key being found after every second Mini-Boss of each dungeon. The Boss Key does not remain with Link should he travel back in time. Instead, he must relocate the Treasure Chest containing the Key to retrieve it once more. However, Link can directly warp to the boss's chamber one they have collected the remains.

Boss Keys are found in Dungeons after a puzzle in Oracle of Seasons. They allow entry into Boss Rooms.

Boss Keys are found in Dungeons after a puzzle in Oracle of Ages. They allow entry into Boss Rooms.

Big Keys function nearly identical to how they functioned in Ocarina of Time and Majora's Mask (the counterpart pair) and would continue for nearly all 3D Zelda games to come. The design of the key would be carried over in later installments such as Phantom Hourglass and The Minish Cap.

In this game, Big Keys are optional items that open Big Chests, which contain a large number of Force Gems.

There are six Big Keys in The Minish Cap, all of which are found inside Dungeons (Deepwood Shrine, the Cave of Flames, the Fortress of Winds, the Temple of Droplets, the Palace of Winds, and Dark Hyrule Castle). Most of them reside in a large blue Chest, and are used to open the large Locked Doors covered by golden chains. The exception to this is the Big Key found in the Temple of Droplets; it is frozen into a Key-sicle, and must be thawed out using Light Beams.

In the Palace of Winds, there are two of these large Locked Doors; however, unlike Small Keys, Big Keys are not consumed after being used as long as Link is in the same Dungeon, and thus the second Locked Door can simply be opened with the same Big Key used to open the first. According to artwork, the Big Key's design is nearly identical to the design in the Wind Waker.

The Big Key from the Goron Mines must be put together by obtaining the three Key Shards from the Elders in Twilight Princess. In the Snowpeak Ruins, the Big Key is replaced by the Bedroom Key, as said dungeon is actually the mansion residence of Yeto and Yeta.

Link must carry the Boss Key in his hands rather than in his inventory in Phantom Hourglass, making him unable to attack and vulnerable to attacks.[6]

Link must carry the Boss Key in his hands rather than in his inventory in Spirit Tracks, making him unable to attack and vulnerable to attacks. In some instances, Boss Keys are electrified and Link must have Princess Zelda possess a Phantom in order to carry them for him. Boss Keys are now not obtained from chests as they were in Phantom Hourglass.