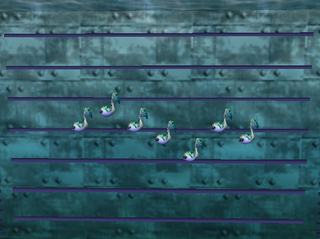 Recovers Lulu's voice and awakens the giant Turtle
The "New Wave Bossa Nova" is a song featured in Majora's Mask.[1]

After Link places the seven Zora Eggs that he rescued in the aquarium located inside the Marine Research Lab, the eggs will hatch and line themselves up according to the notes that make up the "New Wave Bossa Nova." Zora Link must take out the Zora Guitar for the baby Zoras to teach him the bossa nova.

Once the song is learned, Link must play this melody as a Zora in front of Lulu to recover her voice. Upon doing so, the Giant Turtle who was slumbering in the Zora Cape will awaken and grant the young hero access to the Great Bay Temple.[2]

New wave was a popular style of alternative rock during the 70's and 80's, which formed alongside punk. Bossa nova is a style of Brazilian music that was popular in the late 50's and early 60's and is similar to samba and jazz.