Zelda Wiki
Register
Don't have an account?
Sign In
Advertisement
in: Humanoid Enemies, Characters, Characters in Oracle of Seasons,
and 3 more 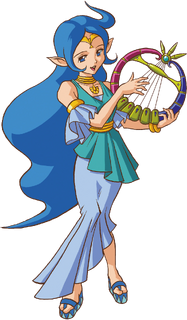 Oracle of Seasons
Oracle of Ages
The Minish Cap

Nayru is a recurring character in The Legend of Zelda series.[3]

Nayru first appears in Oracle of Ages, as the eponymous Oracle of Ages. She is a singer with one of the finest voices ever heard in Labrynna.[4] However, her true identity as the Oracle of Ages is exposed when Veran possesses her,[5][6] in order to take control of Nayru's ability to control the flow of time.[7]

Nayru is a very peaceful person. She enjoys singing, and it is this that has made her popular throughout the land, among Humans and Animals alike. She attracts both when she sings. Her personality is somewhat timid, but judging from her actions, she'll do whatever she can to help a friend in need, or Link. Ralph, her protector whom she has known since they were both children, is a close friend of hers, and never far away.[8]

Nayru also possesses a mystical instrument known as the Harp of Ages, which allows Link (and presumably whoever holds it) to shift through the folds of time, when the right songs are played.[9] However, Nayru will also use the Harp for simply playing a tune on occasion. As the Oracle of Ages, Nayru has no true need for the Harp of Ages, as she is capable of moving through time at a whim. It is quite likely that Nayru herself created the Harp of Ages.

Possessed Nayru is a name given to Nayru while she is possessed by Veran. She was initially possessed in the opening scenes of the game, where the handful of witnesses included Impa, Ralph and Link.[6] Everyone else, aside from the nearly-omniscient Maku Tree, is unaware of the possession, and still believe she is the pure Oracle of Ages. With Nayru serving as her cloak, Veran begins to malevolently advise Queen Ambi's decisions in the past,[10] which affect both the past age's citizens, and the present age in which Link initially resides.

One notable influence Veran gave was to seal off Ambi's Palace from casual visitors, barring both Link and Ralph from attacking Veran directly. Another was to discreetly confiscate all Mystery Seeds, the only known way to harm a possessing Veran without also hurting the possessed. Early in the game, Link unknowingly offered his seeds to the Queen and her adviser in order to temporarily enter the Palace and meet Veran face-to-face.[11] He was still able to gain more Mystery Seeds later in the game, however.

After obtaining the Lonely Peak, Queen Ambi leaves her Palace, dropping the guard enough for Link to penetrate the castle's defenses and reach Possessed Nayru.[12] Once Link is victorious in the ensuing battle, Nayru will be freed from Veran's grasp,[13] and teach Link the Tune of Ages.[14] Veran herself will instead possess Queen Ambi,[15] a possession that will remain until the significantly tougher final boss fight in Black Tower.

Nayru is said to be descended from a long line of Oracles in Labrynna in The Minish Cap.[16] After Vaati impersonates King Daltus, she appears alongside the other Oracles in a room on the second floor of the Happy Hearth Inn, where she is impressed by the size of Hyrule Town.[17]

If Link Fuses Kinstone Pieces with Farore, Gorman arrives in Hyrule Town seeking to rent out his Vacant House.[18] When Link speaks with Gorman, he will ask Link to let him know if he finds a woman willing to rent the House.[19] Link has the option to show any of the three Oracles the Vacant House; if he chooses Din or Farore, Nayru remarks that she is jealous.[20] If the second Vacant House is built and given to another Oracle, Nayru is left as the only one of the trio without a home, and will complain about being lonely.[21]

If Link shows either of the Vacant Houses to Nayru, she will move in; he can visit her afterwards, whereupon she will thank him and offer to give him Nayru's Charm whenever he has an Empty Bottle.[22] When consumed, the Charm makes Link's defenses stronger and turns his tunic (and Ezlo) blue for the duration of the effect.[23]

Link can also Fuse Kinstone Pieces with Nayru,[24] resulting in a Joy Butterfly appearing in the Royal Valley; when it is collected, Link is able to swim more quickly with the Flippers.[25]

In the Oracle of Ages manga by Akira Himekawa, after seeing her capture in the future, Nayru placed a barrier around a forest to hide herself. Only a person with the Triforce mark on their hand could undo it. When Veran possesses Impa, she tricks Link into opening the barrier, entering the forest. As they do so, Nayru senses the presence of light and darkness, becoming disturbed.[26] Soon, Link and a possessed Impa enter the glade, where Nayru sits with the Harp of Ages. She welcomes Link and introduces herself as the Oracle of Ages.[27] Nayru then peers into his future, stating that his story will be told for generations.[28] Link doesn't believe what she says about him.[29] Nayru insists her prophecy is true.[30] Possessed Impa then asks if Nayru can see her fate,[31] the oracle answering that she can, which is why she concealed herself. Although, the oracle accepts that she cannot outwit the Goddess of Time.[32] With that, Veran reveals her possession of Impa. In vain, the forest animals attack the Sheikah, but Veran switches from Impa's body to Nayru's. She then travels to Labrynna's past, and begins her plan for the Twinrova, with Nayru as her host.[33]

After a skirmish with Nayru's childhood friend and guardian, Ralph, Link uses the Harp of Ages to enter Labrynna's past. There, he learns that Veran is using Nayru to manipulate Queen Ambi in an effort to construct a massive Black Tower. With the aid of Sir Raven and eventually Ralph, Link battles to overcome Veran and rescue not only Labrynna, but Nayru as well.

When Sir Raven is captured and sentenced to execution, Link, Ralph, and many others come to his rescue. Link tells Queen Ambi that the Cap'n stills loves her,[34] revealing that the reason why Ambi had agreed to the tower's construction was because she wanted him to see it and remember her.[35] Ambi then proceeds to cancel the tower's construction, upsetting Veran. The latter releases Nayru from her influence, and instead possesses Ambi, commanding her guards to capture Link, Ralph, and Sir Raven.[36] Before any harm can be done, Nayru awakens and teleports the group in Labrynna's present.

Back in the present, Ralph embraces his friend and starts crying, causing Nayru to laugh and call him a "softy".[37] Nayru tells of Veran's Mystery Seed weakness and brings them all back to the past, where she knows to find them.[38] Nayru and her companions find the hidden villagers in a cave. Nayru herself reveals that Roperi's plant is actually a young Mystery Tree.[39] Nayru begins to play her harp to speed the sprout's growth, yet Ralph leaves the cave, set on killing Veran himself. Alarmed, Nayru tells Link that Ralph is Queen Ambi's descendant and that if she dies he will too.[40] As Ralph confronts a possessed Ambi, Nayru hurriedly speeds up the sprout's growth. Once the tree finally produces a seed, Nayru brings it to Link, who quickly rushes with Sir Raven to Ralph.

Together, Ralph, Link, and Raven defeat Veran but are too late. Sacrificing themselves, the Twinrova resurrect Ganon. The trio and Queen Ambi's army take down the demonic beast, restoring happiness and light to Labrynna. Queen Ambi thanks and bids farewell to Link, Ralph, and Nayru. Nayru plays her harp, sending them back to present day Labrynna.

Nayru is last seen with Ralph, Impa, and Princess Zelda at Hyrule Castle, supposedly having a meal together. The princess thanks both Ralph and Nayru for what they have done.[41] Nayru says Link was the true hero and he is very brave.[42]

In Super Smash Bros. Ultimate, Nayru appears as a Spirit with the ability, Perfect-Shield Reflect, which grants a Fighter the ability to reflect projectile attacks back towards opponents when they perform a Perfect Shield.