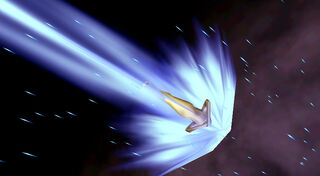 Nayru from Ocarina of Time

Nayru is one of the three Golden Goddesses who created the realm of Hyrule (along with parallel realms, such as the Sacred Realm).[4] Nayru is the source of the fundamental laws that govern the realm of Hyrule.[3] Nayru's essence, as well as the essence of her two sisters, Farore and Din, is the source of the Golden Power within the omnipotent sacred relic, the Triforce.[1][5] Her crest is the Mark of Nayru.

At the dawn of existence, Nayru, along with Din and Farore, descended upon the void that was to become the land of Hyrule, each of them creating a different facet of the realm. According to Ocarina of Time, Nayru "poured her wisdom onto the earth and gave the spirit of law to the world."[2] Upon departure, the three goddesses created the Triforce, the embodiment of their divine essence, and left it within the Sacred Realm.[6]

Nayru's divine essence is what constitutes the Triforce of Wisdom, which affords Princess Zelda her great wisdom and mystical abilities. To a much smaller extent, Nayru's essence can also be invoked by a powerful sorcerer. Her essence provides a protective shield of light when the spell Nayru's Love is cast.[7]

Nayru, the Goddess of Wisdom, is revered for establishing the physical and meta-physical laws of Hyrulean existence, as well as being the designer of space-time itself.[2][3] She is commonly associated with the element of water, and thus she is worshiped as a Goddess of the Seas and other great bodies of water, such as Lake Hylia. Because of her part in creating the laws of the realm, Nayru is possibly also the one worshiped as the Goddess of Time, as referred to in Majora's Mask. Through her association with water, symbols and talismans meant to evoke Nayru are often colored blue.

Of all the races in the Hyrulean realm, the essence of Nayru is best personified by the Zoras. These fish-like, humanoid, water-dwellers are known for their hierarchical form of government, as well as their stoicism and their great wisdom. Though they are native to Zora's Domain, Zoras are found within waterways throughout the Lanayru Province, even as far south as Lake Hylia.

Nayru is commonly associated with string instruments, such as the harp, and singing.

Although never mentioned in-game, the A Link to the Past manual describes how the three Golden Goddesses descended to the world and created life and order.[8] Nayru, referred to by the manual as the "God of Wisdom", created science and wizardry and brought order to nature.[9] Despite Nayru being referred to as a "god" instead of a "goddess" like in later Zelda games, the A Link to the Past/Four Swords manual changed it to a more ambiguous word: "deity."[1] As such, it can be safely assumed that the God of Wisdom described in the manual is Nayru, the Goddess of Wisdom.

In her first in-game appearance in Ocarina of Time, Nayru is represented by a simple golden figure surrounded by a bluish aura, and it is in this game that she is first referred to as the Goddess, not God, of Wisdom.[2] She is first seen when the Great Deku Tree explains to Link the history of Hyrule's creation, which includes a cut-scene of Nayru soaring along with the other two Golden Goddesses: Farore and Din. She is last seen as the three goddesses depart to the heavens and leave the Triforce hidden in the Sacred Realm.

In The Wind Waker, Din, Nayru, and Farore are mentioned during the introduction of the game as well as when King Daphnes Nohansen Hyrule explains the tale of the Great Flood to both Link and Tetra. The three goddesses, after hearing the pleas of the people of Hyrule who were faced by Ganon's onslaught of evil, instructed them to flee to Hyrule's mountaintops in order to escape the apocalypse they were about to unleash upon the land to halt Ganondorf's invasion. It was then that the Golden Goddesses chose to seal away the kingdom of Hyrule by bringing a "torrential downpour of rains from the heavens," leaving the land forgotten beneath the waves.[10][11]

A statue depicting Nayru's characteristics can be found on Southern Triangle Island. A miniature version of this statue can be seen behind the Carlov's counter in the Nintendo Gallery. The statues bear a strong resemblance to the oracle Nayru from Oracle of Ages.

During the Light Spirit Lanayru's tale of the Sacred Realm, the history of how the three goddesses created the land of Hyrule is retold, albeit in a more compressed manner.[12] Lanayru goes on to explain how word of the Sacred Realm soon spread throughout Hyrule, causing a great battle and marking the appearance of the Dark Interlopers who excelled at magic.[13] These sorcerers tried to establish dominion over the Sacred Realm, but it was then that the goddesses, Nayru included, commanded the three Light Spirits to intervene and seal away the great magic the interlopers had mastered.[14]

Nayru is also one of the Golden Goddesses depicted in a giant monument that appears in the throne room of Hyrule Castle.