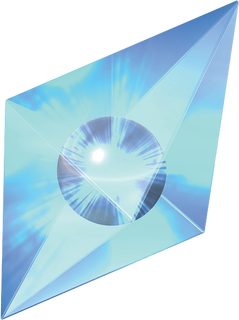 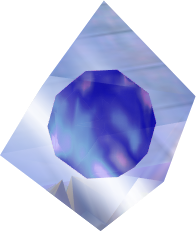 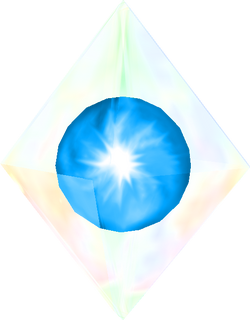 Nayru's Love is a recurring Spell in The Legend of Zelda series.

In Ocarina of Time, Nayru's Love is received from the Great Fairy of Magic in the Desert Colossus.[1] When used, the Spell surrounds Link's body with a diamond-shaped barrier, which lasts for exactly one minute.[2] Nayru's Love prevents all damage, but does not stop recoil from enemy attacks. It can be activated instantly on command, but only deactivates when it wears off. The effect of Nayru's Love wearing off is signaled by the barrier flickering while the noise that accompanies it falters. It drains 12 Magic Power when used. While activated, Link cannot use any other items that drain Magic Power.

Nayru's Love is Zelda's neutral special move. When performed, a blue diamond-shaped barrier surrounds Zelda, which then shatters into tiny blue crystals as Zelda spins around. The shards deal slight damage to any nearby opponents. The spell can reflect projectile attacks when timed correctly.[3]

One of the attacks that Zelda can execute with her Rapier is summoning a large crystal of ice. This, joined with her two other attacks resembling Din's Fire and Farore's Wind, appears to be a reference to Nayru's Love.

Nayru's Love appears as a special defensive ability unique to Zelda. If Cadence wakes her up first, it can be found within Hyrule Castle on the floor outside of Zelda's room being guarded by a Green Guard, or if Link is woken up first, it appears automatically in Zelda's inventory when he obtains the Small Shield. Once acquired, Zelda can use it to reflect or block attacks and projectiles back at her enemies at the cost of Stamina.[5]

Magic in The Legend of Zelda series
Community content is available under GNU Free Documentation License unless otherwise noted.
Advertisement