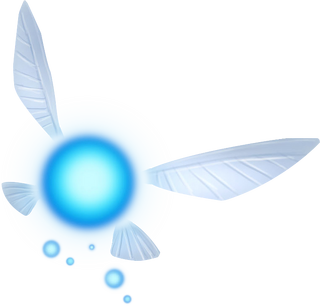 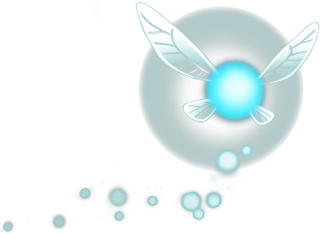 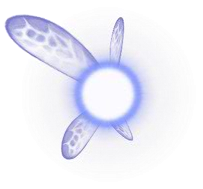 Link and the Portal of Doom
Hyrule Warriors

Navi (pronounced /ˈnɑː.viː/, NAH-vee)[citation needed] is a recurring character in The Legend of Zelda series.[2] She is a Fairy who serves as Link's companion in his quest to save Hyrule.[3]

Since Link is not a Kokiri and does not have a Fairy to call his own, Navi is summoned by the Great Deku Tree to accompany him on his quest to save Hyrule.[3][4] Throughout the game, Navi provides Link with a variety of clues to help him solve puzzles and progress in his quest.[5][6][7] Navi also helps Link learn the controls in the game, teaching him how to open doors and how to push and pull blocks.[8][9] The player can listen to Navi's advice by pressing the C-Up Button in the controller whenever her name flashes on the screen.[4] 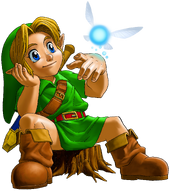 Navi's primary purpose is to function as a focusing target. By pressing the Z Button, Navi targets the most nearby object, enemy, or person. She glows yellow to indicate when she is targeting an enemy, blue when Link can talk to someone from a distance, and green when she is targeting something of interest. Any time Navi targets something, she yells out to Link "Hey!", "Listen!", or "Watch out!" Pressing the C-Up Button while targeting an enemy allows Link to hear from Navi information about said foe. Once Link learns "Saria's Song," he can communicate with Saria through Navi.[10] When Navi's help is not being used, she seemingly hides herself inside Link's hat. However, she can be summoned at any time by pressing the A Button while Link is standing still. In Ocarina of Time 3D, Navi also often tells Link to take a rest from playing.[11]

Although Navi can target most enemies and give Link clues on how to defeat them, during the battle against Ganondorf, Navi is unable to help him due to the waves of darkness produced by the King of Evil.[12] Once Link defeats Ganondorf and escapes the crumbling Ganon's Castle along with Princess Zelda, Navi apologizes for not having helped him in the battle.[13] However, Ganondorf emerges shortly after from the castle ruins and transforms into Ganon. Navi, willing to aid Link, exclaims that she will not be held back by Ganondorf again and joins him in the fight, where they eventually defeat the King of Evil.[14] After Princess Zelda sends Link back to his original time, Navi can be seen leaving Link's side for undisclosed reasons as she flies away into the lit window inside the Temple of Time.

During the prologue of Majora's Mask, Link sets on a journey to find Navi after the events of Ocarina of Time.[15][16]

Navi is first seen spying on Gohma, as it begins feeding on the Great Deku Tree's insides. He tells her to go find Link, [17] so she leads the boy to the Great Deku Tree, who is close to death. Once Link and Mido enter the Great Deku Tree's trunk, they are faced with Gohma. As Link battles the menace, Navi tells him about Gohma's week spot, its eye. [18] Link then shoots the monster with his slingshot, ending the battle. When Link realizes he is too late, the Great Deku Tree tells the boy he can defeat the evil growing in Hyrule. Navi is then commanded to help Link. [19] Throught the manga, Navi guides and accompanies Link, even comforting him when he worries about seeing Princess Zelda again. [20] As Link battles Ganondorf, the Gerudo king uses his magic to keep Navi away. [21] When he defeats the thief, Navi apologizes for not being able to help, [22] but is reassured by Link that it's ok. [23] Shockingly, Ganondorf is revealed to have survived the encounter, and transforms into the hideous beast Ganon. Link is wounded in the unexpected event, causing Navi to fret and worry. [24] When Ganon approaches, Navi attempts to defend her wounded friend, but is pushed aside by the demon. [25] Luckily, Princess Zelda retrieves the Master Sword, allowing Link to resume the fight. Navi alerts Link to Ganon's weak point, [26] allowing the hero to wound him. At the end of the Ocarina of Time manga by Akira Himekawa, just as Navi leaves Link, she tells him that she loves him, [27] and that the forest will be safe with a magnificent hero. [28]

In the Majora's Mask manga by Akira Himekawa, Navi makes a small cameo during the prologue where Link sets on his journey to the forest in search for her.[29]

In the North American version of Hyrule Warriors, Navi appears at the beginning of the "Land of Myth" Scenario, pleading to Impa and Sheik that they save the captive Princess Ruto from Darunia and his troops; however, in the Japanese and European release as well in Hyrule Warriors Legends and Hyrule Warriors: Definitive Edition, she is referred to only as a generic Fairy. Navi's speech portrait also refers to her as a generic Fairy while she is speaking during the battle in all versions.[30]

When the concept of Z-targeting was being developed, an upside-down triangle was used to determine which enemy Link was targeting. The designers felt this marker was too simple, so they wanted to replace it with a cute Fairy girl, believing it would fit the Zelda atmosphere. However, the Nintendo 64 was not able to support such a Fairy, so a ball of light with wings was used instead. She was originally called the "Fairy Navigation System," but was later simply named Navi. After naming her, many of her functions were designed, such as changing color to distinguish between friends and foes, acting as a guide, and providing strategy tips.

Her design also allowed developers to overcome a problem in Kokiri Forest. Due to the Nintendo 64's limitations, it was difficult to display the villagers and structures all at once, so each person was paired with a Fairy to help locate them. When Link approached them, their owners would appear and he could interact with them. Both of these expanded the story so that Link was the only child in the forest without a Fairy, then he met and parted with a Fairy companion.[31]

Navi is one of the more criticized The Legend of Zelda series characters, which is due to her constant yelling of "Hey!" and "Listen!" throughout the game and for giving "unsolicited advice."[32][33] Cracked.com editor, Tim Lovett, listed Navi the eighth most annoying video character, mentioning how she "pester[ed]" Link like a "naggy, clinging spouse."[34] Although Mikel Reparaz from GamesRadar credited Navi for helping players by locking onto targets and enemies,[35] he criticized her for the overused "Hey! Listen!" phrase and listed her as the number one most irritating female character. Additionally, another GamesRadar editor ranked her second place in a list of "cutesy characters" they want to "beat the crap out of," describing her as a "tactless" Tinkerbell and considering her to distract players from the gameplay.[36] GameDaily also listed her as one of the gaming characters they "wish they could kill, but can't."[37]

Navi's name comes from the word "navigation." Navi was originally supposed to be named "Fairy Navigation System," but since the name was too long, the developers changed it simply to Navi.[43]