Nakura is a character from The Legend of Zelda: Link's Awakening. This spirit is the ghost of a person who lived in a house near Toronbo Shores. It plays a part in one of the game's few mandatory sidequests.

Shortly after the completion of Angler's Tunnel, Link finds himself being haunted by a strange ghost, who periodically asks the hero to take it to its home. While Nakura follows Link, he cannot enter any dungeons and is thus unable to complete the game until he aids the ghost. Left with no choice, Link travels south to the Toronbo Shores, and finds a dilapidated house.

The ghost examines the house in which it had lived when it was alive and finds it to be essentially unchanged from the way it remembered it to be. It then asks Link to bring it back to its grave to the north of Koholint Prairie (incidentally, it is not located in the Cemetery). As they approach the grave, the ghost thanks Link for aiding him and tells him to return to the house and search underneath one of the pots to find a reward: a Secret Seashell. It then returns to its grave to continue its eternal slumber, allowing Link to continue his quest to retrieve the Instruments of the Sirens.

Subsequently, if Link approaches the grave, the Photographer arrives to take a picture of Link. While Link is seemingly standing alone leaning against the gravestone when the picture is taken, the developed picture reveals the now-smiling ghost to have been captured on film as well. Link can also spinkle Magic Powder on the ghost's grave, even before it starts haunting him. This will anger the spirit and cause it to threaten Link with a curse; however, it never goes through with its threat, as Link can continue sprinkling the grave with powder to no ill effect.

Nakura plays a larger role in the manga. After Link loses a battle against Karuna and has his Sword broken, he is approached by Nakura. Link helps Nakura return to his home, and in exchange for helping him, Nakura allows Link to take his sword. Link then uses his new sword to defeat Karuna and the remaining enemies on his adventure.

It has been speculated that Nakura is the spirit of a person killed by the Angler Fish. A single human skull--a unique graphical adornment with no context provided, though it may have perhaps been added to underline the boss' ferociousness--can be found at the bottom of the boss' lair; the ghost begins haunting Link not long after he has visited this area. This may also explain the ghost's aversion towards entering dungeons. 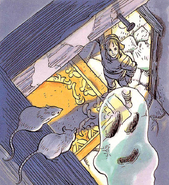 Artwork of Link and Nakura

Photograph of Nakura with Link from The Travels of Link
Add a photo to this gallery
Retrieved from "https://zelda.fandom.com/wiki/Nakura?oldid=525457"
Community content is available under CC-BY-SA unless otherwise noted.