It has been suggested that this article or section be merged with Impa's Naginata. 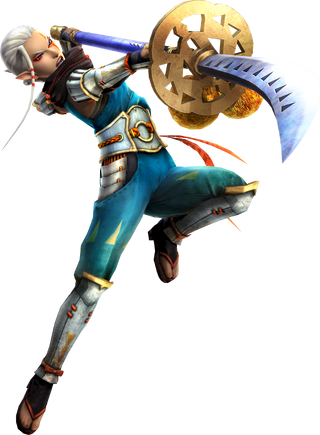 Defeating enemies
The Naginata is a class of Weapon used by Impa in Hyrule Warriors.[name reference needed] It is associated with Fire.

The default Naginata is the Guardian Naginata, which has a blue body and a massive, golden tsuba that guards from the long steel blade. In Hyrule Warriors, it is found by beating the Adventure Mode Adventure Map square G-9 after using a Candle Item Card to find it.

The Scorching Naginata has a purple body with intricate, golden designs and a round tsuba with a red, flame-shaped blade. In Hyrule Warriors, it is obtained by getting an A-Rank while playing as Impa on the Adventure Map square G-11 after revealing it with a Candle.

The Sheikah Naginata bears a red body and a guard in the shape of a stylized Eye Symbol, a mark of the Sheikah. In Hyrule Warriors, it is obtained from getting an A-Rank while playing as Impa on the Adventure Map square D-15, after using a Water Bomb to find it.

Impa holds the Naginata upwards, then twirls it. A red circle of arcane symbols appears on the ground, drawing enemies in as several blades rise to the sky and a pupil-less Sheikah eye appears in the air above the center. The eye gains its pupil as the blades crash down on the enemies. This attack hits a very wide, circular area ahead of Impa.

Naginatas in The Legend of Zelda series
Community content is available under GNU Free Documentation License unless otherwise noted.
Advertisement