Zelda Wiki
Register
Don't have an account?
Sign In
Advertisement
in: Ponds, Locations, Locations in A Link to the Past 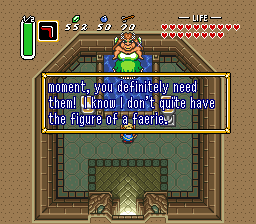 The Mysterious Pond in the Dark World

Great Fairy Fountain
Waterfall of Wishing
Pond of Happiness
Mysterious Ponds are locations in A Link to the Past[1] They are crucial during Link's quest. There are two Mysterious Ponds: one in the Light World known as the Waterfall of Wishing, and another one in the Dark World situated at the base of the Pyramid of Power. Both ponds have the same appearance from the inside, and they also house a Great Fairy within who will upgrade certain items of Link's inventory. The fairy asking a question about an item dropped into the water and giving a better item in return for an honest answer resembles the story, The Honest Woodman.

The Mysterious Pond of the Waterfall of Wishing is home to Venus's friend, but it can only be reached after Link has received the Zora's Flippers from King Zora in Zora's River.[2][3] Hidden behind a waterfall, Link can throw in a Boomerang, Bottle, and a Fighter's Shield to receive the Magical Boomerang, Medicine of Magic, and the Red Shield from the Great Fairy, respectively, only if the young hero answers the fairy's question honestly.[4]

The other pond located in the Dark World contains the Cursed Fairy that will bestow upon Link the Silver Arrows necessary to truly defeat Ganon. She will also upgrade Link's Master Sword or Tempered Sword to the ultimate weapon: the Golden Sword. The only way to access this Mysterious Pond is by blowing up the entrance using the Super Bomb. Once Link meets her, she mentions that her current cursed form is caused by Ganon's evil power, and urges Link to defeat him.[5]

Although not officially named a Mysterious Pond, there exists another pond known as the Pond of Happiness where Venus, the Queen of Fairies, lives.

Ponds in The Legend of Zelda series
Community content is available under GNU Free Documentation License unless otherwise noted.
Advertisement