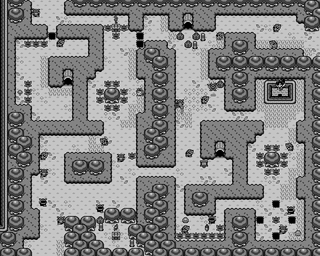 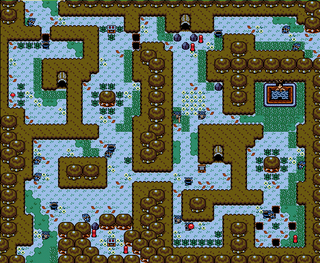 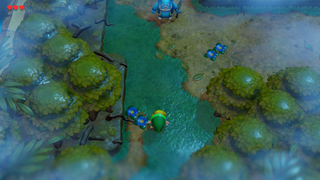 The Mysterious Forest, also known as Mysterious Woods, is a location in Link's Awakening.[1]

The Mysterious Woods are a Forest located in the west area of Koholint Island. It is found north of Mabe Village, south of Goponga Swamp, and west of Koholint Prairie. It is one of the first places Link visits during his adventure to wake the Wind Fish, and is the second area in which he meets the Owl. The Tail Key, which unlocks the entrance to the game's first Dungeon, Tail Cave, can be found here.

As the name implies, the Mysterious Woods are known for being slightly mysterious,[2] possibly referring to the fact that they are quite maze-like or that they are home to a Great Fairy. They have three entrances, the main one, located in the southwest, leading to Mabe Village. There is another in the northwest leading to Goponga Swamp, and a final one in northeast leading to Koholint Prairie. The Woods appear darker than most other areas in the game, suggesting that they have little lighting. This is most likely due to the many trees in the area. It is implied that mushrooms and toadstools grow well in the Mysterious Woods, as Tarin came here looking for toadstools,[3] and the Witch specifically tells Link that he should look for mushrooms here if he ever runs out of Magic Powder.[4] The Woods also contain two small caves, one of which has two entrances connecting the eastern and northwestern areas. In order to navigate the Woods, Link must obtain the Magic Powder, and in order to fully explore it, he must obtain the Power Bracelet and Hookshot. There are several holes that can be bypassed with the Roc's Feather, but these only serve as shortcuts.

According to Grandpa Ulrira, the Mysterious Woods are home to most of the Moblins that inhabit Koholint Island.[5] They are also home to many Zol, and several Keese can be found inside the cave connecting the eastern and northwestern areas. To the right of the entrance of the Woods is a Treasure Chest containing a Secret Seashell. However, Link cannot reach it initially as it is blocked off by a Rock that requires the Power Bracelet to move. Another treasure chest containing the Tail Key can be found in the very north of the Woods.

Link first travels to the Mysterious Woods after being instructed to do so by the Owl once he obtains his Sword at Toronbo Shores.[6] On the way, he can speak to Marin, who informs him that Tarin went into the Woods to look for toadstools.[3] Upon arriving in the Woods, he is greeted by the Owl, who explains that Link may find it difficult to leave the island while the Wind Fish sleeps, and should enter Tail Cave using the Key that can be found in the Woods.[7] Upon Link's initial visit, the path to the northern area is blocked by a racoon, who casts a curse on Link if he tries to pass. This curse only sends him to another part of the forest.[8] Link must obtain some Magic Powder, to which the raccoon's nose is sensitive,[9] in order to pass. Link must travel through the cave connecting the eastern and northwestern areas of the Woods to find a Sleepy Toadstool. This must be taken to the Witch who lives in Koholint Prarie, who will use it to make Magic Powder.[10] Link must return to the Mysterious Woods and use the Magic Powder on the raccoon. The raccoon turns out to actually be Tarin, who transformed after eating an unusual toadstool.[11] Sprinkling Magic Powder on him changes him back and allows passage through the Woods, to where the Tail Key can be found. From that point, Link can return to the South of the Village region and enter Tail Cave.

In the eastern area of the Woods is a tunnel that leads to the northwestern area, outside of which is a sign warning travelers about cracked floors.[12] Within the first room of this tunnel is a treasure chest containing fifty Rupees surrounded by several crystalline obstacles that must be shattered with the sword. The second room contains nothing but two Green Zols, while the third contains a Piece of Heart, although it can only be obtained if Link has obtained the Power Bracelet from Bottle Grotto. Just outside the northwestern exit of this tunnel, a Sleepy Toadstool can be found, which can be taken to the Witch, who can use it to make Magic Powder.[10]

In the very north of the Woods is another cave that contains a large chasm. This can be traversed using the Hookshot, and leads Link to a Treasure Chest containing fifty Rupees. In the far east of the Woods is a Faerie Spring which is home to the first Great Fairy that Link can encounter in the game. Finally, one screen to the left of the Faerie Spring is a hidden staircase beneath a rock that requires the Power Bracelet to move. This leads to a cavern containing a Mad Batter, who allows Link to carry more Magic Powder.[13]

In the Link's Awakening manga by Ataru Cagiva, after Link recovers his Sword, the Owl appears and comments that he will be waiting for him in the Mysterious Forest. While on his way, Marin appears and tells Link that Tarin has not returned from the Forest. After arriving, Link finds that Tarin is been attacked by a Boarblin. After attacking it with a kick, the defeated Boarblin falls on a box, crushing it. Inside, they find the Tail Key. The Owl then appears, telling Link to use it to open Tail Cave.