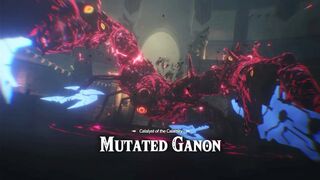 Mutated Ganon is extremely reminiscent of Breath of the Wild's Calamity Ganon. It has two arms which are made of Malice and covered in Eyes Of Malice. The arms themselves have a sawblade and a sword respectively. It also has whisker-like appendages jutting out from beside its head with blades(Including one strangely reminiscent of a Lizal Tri-Boomerang) for defending its vulnerable head. It walks on spine-like legs. Despite its massive size, it is surprisingly agile, able to jump high and far. It has two phases; in the first, none of its unique abilities are shown, and its eye, which is down at ground level, is a weak point, making it extremely easy to hurt its weak point gauge. Eventually, it charges itself up with Malice, and its eye is no longer a weak spot (though this is seemingly at the cost of giving its weapons weak point gauges.) and its weapons become targetable with Lock-On. It can even use two rune-counterable attacks at the same time(Though the usefulness of that is seemingly very low.) Its attacks are as follows:

In Phase 2, its attacks are enhanced

Ganon in The Legend of Zelda series
Community content is available under GNU Free Documentation License unless otherwise noted.
Advertisement