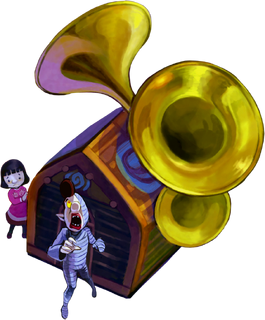 Ikana Canyon
The Music Box House is the home of Pamela and her father in Majora's Mask.[1] It is located atop the valley of Ikana Canyon.

The house itself functions as a large phonograph, with three large flaring horns jutting from the roof. A waterwheel powers the house and enables it to play "Farewell to Gibdos", a song that drives away Gibdos and other evil spirits.[2] However, when Link first encounters the Music Box House, it is surrounded by Gibdos because the river driving the waterwheel has dried up and the music has ceased to play. The mummified creatures believe that Pamela's father, who has begun to take the form of a Gibdo himself, is of their kind, and they refuse to leave the surroundings of the house until he joins the rest of the Gibdos.[3] Because of this, Pamela refuses to open the door to Link, thinking that he is a Gibdo trying to get inside and take her father away.[4]

Sharp, one of the Composer Brothers, is the one who has laid a curse upon the Spring Water Cave, stopping the water flow and thus preventing the waterwheel of the Music Box House to function properly.[5] Link learns the "Song of Storms" from his brother Flat,[6] and uses it to break the curse upon him and return the Spring Water Cave to normal.[7] At the same time, the Music Box House starts playing the melody "Farewell to Gibdos" again, as the Gibdos that had been haunting the surroundings of the house are swallowed up by the earth.

Soon after this, Pamela unlocks the door to the house, giving Link an opportunity to sneak inside while she goes to the nearby well. When Link goes downstairs into the basement, a mummified man lunges out from the closet, approaching the young hero at a slow pace. If Link plays the "Song of Healing" to the man before Pamela comes in and kicks him out of the house,[8] the man will be healed from his curse, revealing himself to be Pamela's father. The curse that had been afflicting her father turns into the Gibdo Mask, which the young hero picks up before leaving Pamela and her father to an emotional scene.

Link can visit the house again later to speak with Pamela and her father. Pamela would rather leave Ikana and return to Clock Town,[9] but her father, a famed academic who researches supernatural phenomena,[10] studies the Garo,[11] Gibdos,[2] and other ghosts in Ikana.[12]

The thief in Ikana Valley, Sakon, briefly considered stealing or ransacking the Music Box House, but decided its size and dependence on running water made it unprofitable.[13]