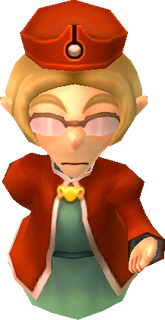 Mr. Tudor is a character in Tri Force Heroes.[1]

Mr. Tudor can be found next to the small libraries in each of the Hytopia Castle lobbies. He gives Link tips on venturing out into the Drablands. He also appears in the Coliseum lobby, although the only tip he can offer there is how to Blacklist other Link. When the Link are traveling between Stages in a Level, Mr. Tudor briefly appears on-screen to give them some advice.

Mr. Tudor has dreamed of being a renowned writer since he was a young boy.[2] He is the writer of the Drablands Diary under the pseudonym of Four Eyes.[3]

At the conclusion of the game's ending, Mr. Tudor's hat and glasses are seen resting on a table alongside the storybook which had, just prior, illustrated the events of the game's story.

Tudor is likely a corruption of "tutor", a person who gives private instructions. Tudor is also a name of Welsh origin, which was the Welsh form of the old Celtic name Teutorigos, which meant "ruler of the people." It was notably the surname of five monarchs of England. Four Eyes is a common epithet for a person who wears glasses. Four Eyes's name in the UK, Bob-cut Four-eyes, further references Mr. Tudor as he wears a bob-cut hair style.

Hytopians in The Legend of Zelda series
Community content is available under GNU Free Documentation License unless otherwise noted.
Advertisement