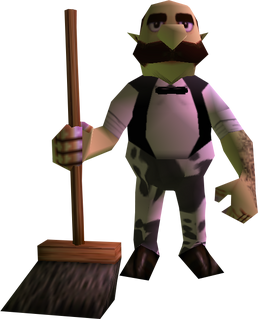 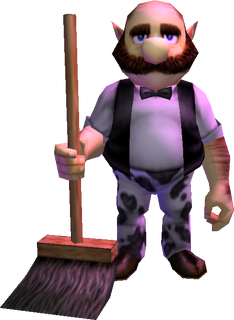 Mr. Barten is a character in Majora's Mask.[1]

Mr. Barten is the owner and bartender of the Milk Bar in East Clock Town. During the day, he resides in his bar sweeping the floor, allowing Link to stay as long as he does not get in the way.[2] He does not permit entry to anyone into his bar in the evening without proof of membership, in the form of Romani's Mask,[3] and refuses service to those who do not wear the Mask inside.[4] However, he is willing to allow Gorman to stay at the bar as his guest out of pity after the Gorman Troupe's job at the Carnival of Time is cancelled, and even allows him to drink despite not being a member. Mr. Barten considers himself as the kind of person who stays at his business no matter what, and as such, he is one of the few characters who do not flee town despite that the Moon is about to crash.[5]

If Link talks to him on the night of the Final Day, Mr. Barten reveals that he was waiting and hoping that one of his favorite customers would show up. As such, he mentions he was not wrong since Link did stop in at the bar.[6]

Mr. Barten's name may be an contraction of bartender.