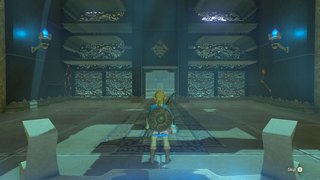 The Mozo Shenno Shrine,[1] designated by the Trial name A Major Test of Strength,[1] is an Ancient Shrine in Breath of the Wild.

The Shrine is located below the Biron Snowshelf in the Hebra Mountains. It's accessed as part of the Shrine Quest "The Bird in the Mountains".

Link can start the Quest by talking to Molli in Rito Village, where she'll ask him if he wants to hear a story.[2] She tells Link a story about her grandfather, who stopped at a big tree while climbing below him and looked northwest.[3] Suddenly, he saw a huge, snow-white bird with its wings spread.[4] He flew after the bird, noticing something important in its stomach as he approached.[5] Molli starts to share what it was,[6] but since she gets sleepy around this part of the story, she doesn't remember.[7]

However, Molli does know where the big tree is.[8] She points Link towards a cedar tree atop Talonto Peak, claiming it's the tree from her grandfather's story.[9]

If Link glides northwest with the Paraglider from the same cedar tree, he can see the Ancient Shrine hidden in a small cave under the Biron Snowshelf, which resembles a white bird with its wings spread. Activating the Shrine will complete the Quest. As Link enters the Shrine, he is greeted by the Shrine's Monk, Mozo Shenno.[10]

The Mozo Shenno Shrine features a large central chamber which acts as an arena. As Link approaches the center of the arena, a Guardian Scout IV, wielding an Ancient Battle Axe++, a Guardian Sword++, and a Guardian Spear++, will rise from a pit to challenge Link. There are metal blocks embedded into the floor of the chamber, which can be lifted with Magnesis to protect Link from the Guardian Scout IV. Link must defeat the Guardian Scout IV to cause a portcullis separating him from the Monk to rise.

Once Link has done so, Mozo Shenno will give Link a Spirit Orb for completing the Trial,[11] and will wish Link well before fading away.[12]

A Treasure Chest behind the portcullis contains a Diamond.