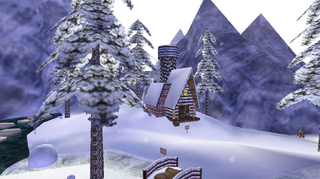 Mountain Village during the winter

Mountain Village is situated in the Snowhead region of Termina. It is home to the Snowhead Blacksmiths, Zubora and Gabora, who are able to upgrade Link's Kokiri Sword to a Razor Sword, eventually leading to the Gilded Sword with a little Gold Dust. There is also a Goron stranded on a cliff-face in this area, whom Link is able to rescue by revitalizing the Goron's strength with a Rock Sirloin from Goron Shrine, receiving Don Gero's Mask in return.

Mountain Village is the main area that leads to all of the prominent locations of Snowhead, so Link must pass through here in order to access the other regions. High above a cliff rests the Goron Graveyard, which is the resting place of the Goron hero, Darmani III.[2] However, during the winter, Link must use the Lens of Truth to see the rungs to climb up the cliff. The east leads to the Goron Village, while the west yields a path towards Snowhead and, ultimately, the Snowhead Temple itself.

During the springtime, there is also a pond where Don Gero's Frog Choir can be found, which eventually leads to Link receiving a Piece of Heart.