Zelda Wiki
Register
Don't have an account?
Sign In
Advertisement
in: Mountains, Locations, Locations in The Minish Cap 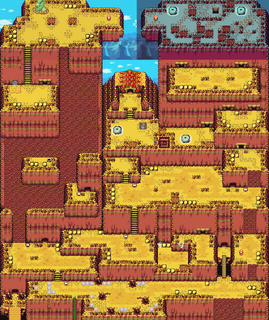 The landscape of Mount Crenel

Melari's Mine
Mount Crenel,[1] also called Mt. Crenel,[2] is an area in The Minish Cap.

Mount Crenel is a craggy, mountainous area located in northwestern Hyrule. It connects to one other area: Mount Crenel's Base to the south.

Mount Crenel is home to the Mountain Minish, among whom is the Minish metal smith Melari and his seven apprentices. The Great Mayfly Fairy is also found here, providing Link with a larger Bomb Bag, as well as the reclusive Crenel Hermit; both live high up on the Crenel Wall. Lastly, one of the nine Blade Brothers, Grayblade, who teaches Link the Roll Attack, is also found by scaling the walls of Mount Crenel on the southeastern side.

Mount Crenel employs the use of blue and green beanstalks to ascend further up the mountainside, the green of which cannot be grown with simple water, but must be supplied with Mt. Crenel Mineral Water gathered from the natural hot spring at the base of the mountain. The Grip Ring, found in a cave opened with Bombs and bought from the Business Scrub within, is used extensively and is required to scale the vertical, rocky walls of Mount Crenel. A unique feature of Ezlo is also introduced in this area, as Link needs to cross cliffs via small Updrafts. The Gust Jar can remove spiky obstacles and uncover enemies hidden beneath rocks.

The most significant area of Mount Crenel is the Crenel Wall region, an enormous expanse of vertical rock face that can only be climbed with the aid of the Grip Ring. With the Grip Ring in hand, Link will be able to reach the summit of the mountain via its only route; without it, Link will not be able to reach the summit any other way. Like the climb to the apex of Death Mountain in Ocarina of Time, falling Boulders threaten any safe passage to the mountaintop.

Mount Crenel was once home to the Gorons before their numbers began to dwindle. The mountain is full of Tektites, Peahats, and falling Boulders, endangering any who venture the risky ascent to the summit. Near the top of the mountain is a human mine, which is the second Dungeon called the Cave of Flames. In this Dungeon, Link receives the Cane of Pacci. The Boss of the Dungeon is Gleerok, and upon his defeat Link receives the Fire Element, the second of the Four Elements, and a full Heart Container. This area is also notable for its many secrets, including Pieces of Heart and Fairy Fountains.

Mountains in The Legend of Zelda series
Community content is available under GNU Free Documentation License unless otherwise noted.
Advertisement