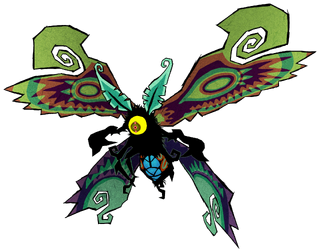 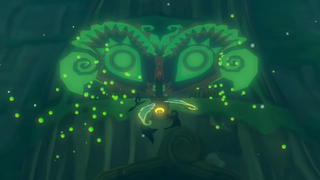 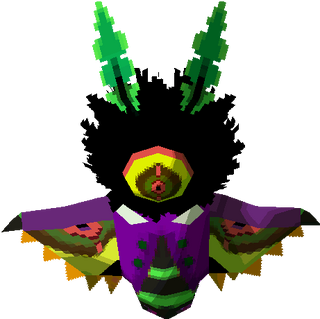 Mothula is a recurring Enemy in The Legend of Zelda series.[1] It made its first appearance in A Link to the Past as the Boss of the Skull Woods. It would later take on a smaller role as a mini-boss, and afterwards as a common enemy.

In A Link to the Past, Mothula is the Boss of Skull Woods, the third dungeon of the Dark World.

Mothula resides in a room with a moving mechanical floor, which is surrounded by Blade Traps. Once the fight begins, the floor starts moving. The Blade Traps also begin to slide across the floor, causing damage if they come in contact with Link. Mothula attacks by flying around and spewing a series of three energy beams at Link at regular intervals.

The most effective methods of attack are the Master Sword and Tempered Sword, which can finish the fight before Mothula gets any chances to attack. Mothula is also vulnerable to the Fire Rod, although it drains Magic Power quickly. For this reason it helps to upgrade the Magic Meter before fighting Mothula.

Mothula is the only Boss that can be hurt by Bees and Golden Bees.

Mothula is fought again in the Palace of the Four Sword in the Game Boy Advance version of the game. Although the battle arena is now more lenient, the boss itself is not. Mothula multiplies itself by three, but the extra replicas are defeated after the first hit when they get attacked by Link. Each defeated replica splits into four Bees that chase Link for a short time. The surviving replicas attack Link with single shots of energy beam, which suggests that the boss's power is divided when it splits. When the two fake replicas are defeated, the true one multiplies itself by three once more. After Link depletes the true Mothula's life energy, any remaining clone automatically disappear.

In Oracle of Seasons, Mothula guards the Bright Sun in the Poison Moth's Lair.[2] It fights by circling around the room and spitting fire at Link. It also releases Moths from time to time to defend itself. After a short period of time, it settles on one of the two platforms in the middle of the room, leaving itself open for attack. The Roc's Feather can be used to jump across the two platforms and dodge attacks. If Link falls through the gap in the floor, any damage Mothula sustained is undone and Link must restart the battle.

In The Wind Waker, Mothula appear in various caves and dungeons in two varieties: winged and wingless. Both attack by biting Link and occasionally release Morths to slow his movement, however the winged variety will also attempt to jet at Link like a rocket while the wingless variety is much faster and more aggressive. The wingless Mothula can be killed in one hit with a Parry attack, while winged Mothulas take a few more hits with Parries. Those with wings can have them clipped off with the Boomerang, Hookshot, or Arrows. Fire and Ice Arrows can clip their wings in one shot.

A winged Mothula appears in the Forbidden Woods as a mini-boss. As Link does not have any of the aforementioned equipment at the time, it must be stunned with the Deku Leaf and attacked with the Sword. After it loses all its wings, a few more Sword strikes will finish it off and Link will earn the Boomerang.

A Mothula appears as a mini-boss in Spirit Tracks inside the Forest Temple. It attacks Link by launching Bubbles at him. Link must use the Whirlwind to launch the Bubbles back and stun it, allowing him to attack. If Link tries to attack them while they are not stunned, they disappear and reappear in another place. If Link blows the Whirlwind at them, they return the attack at him, stunning him. Two other Mothulas can be fought in the Take 'Em All On! mini-game at Castle Town. Although they resemble their The Wind Waker incarnation, they are far smaller. One Arrow shot can defeat them instantly.