Zelda Wiki
Register
Don't have an account?
Sign In
Advertisement
in: Enemies, Arthropod Enemies, Common Enemies and Traps,
and 5 more 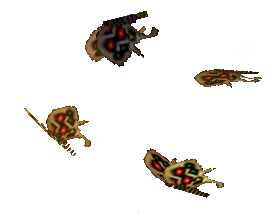 Moths can be found throughout Woodfall Temple in Majora's Mask. They are commonly seen flying around lit Torches, at which time they pose no threat to Link. However, if he uses the Torch to light a Deku Stick, they will follow the lit Deku Stick and attack Link if they come close enough. Moths will continue to follow Link until either the Stick burns up completely or it is put away.

Moths are also summoned by Odolwa. In this battle, they are much more aggressive and will actively seek out Link to harm him. If he dons the Deku Mask and transforms into Deku Link, they will still follow him but will be unable to damage him.[verification needed] Link can defeat the Moths by throwing a Bomb or picking a Bomb Flower, which will cause the Moths to flock to the explosive. Alternatively, Link can wait until Odolwa creates a ring of fire, which will cause the Moths to burn up.

Moths appear during the battle with Mothula in the Poison Moth's Lair in Oracle of Seasons. They fly around the room, attempting to hit Link and push him down the holes, thus forcing Link to restart the battle.

Moths are summoned by the Shadow Hag in the Moonlit Grotto in Oracle of Ages. Once all of her shadows merge back into one, she releases these bugs to prevent Link from shooting her with the Seed Shooter.

Insects in The Legend of Zelda series
Community content is available under GNU Free Documentation License unless otherwise noted.
Advertisement