Not to be confused with Morpheel. 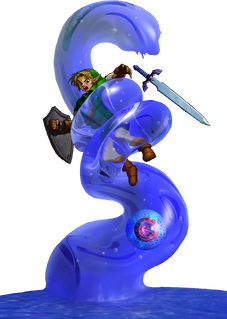 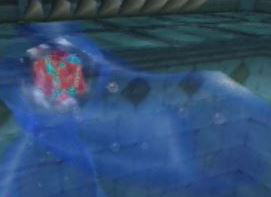 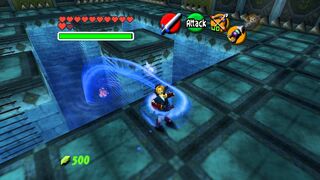 Morpha is the Boss of the Water Temple in Ocarina of Time.[1] Created by Ganondorf after he acquired the Triforce of Power, it has complete control over the water in the room in which it resides, moving swiftly through it and creating long amoeba-like "limbs".[2] This monster is responsible for the receded state of Lake Hylia as well as the frozen condition of Zora's Domain.[3]

Morpha itself is not the transparent muscle-like tentacle as its Ocarina of Time official artwork suggests, but the vulnerable red nucleus often safeguarded under the muck of the thick liquid. This nucleus can manipulate the water in any way it likes, creating one (and eventually two) large water tentacles as the battle progresses.

As Link enters the boss room, Princess Ruto warns him that the water in the room "isn't normal".[4] As he jumps onto one of the four pillars standing in the pool of water, a cutscene shows the view of a creature lurking in the water. It slowly makes its way to Link and emerges from the water behind him. The hero looks back at one of Morpha's tentacles before it vanishes, and the battle commences.

Morpha's nucleus churns the water below and rises within the center of one of its created tentacles. While the amoebic liquid is impossible to penetrate when in large concentrations in the pool, whenever a single-arm rises and latches upon the land, the liquid becomes thin enough to pierce with the spike of the Longshot. Link must hook the nucleus, and slash at it while it is on land during its Critical Point, the time in which it is entirely vulnerable and clear of any amoebic fluid. If Link is Morpha's body of water, its nucleus will charge at him. While Link is in the water, its tentacles will not appear.

Morpha eventually adapts to the battle and grows a second tentacle, using it to distract Link from latching on to itself again. Just like with the single tentacle, the second one can grab Link, swing him about, and then throw him at the spikes at the edge of the arena, causing surplus damage. It is also notable that if Link stays in the corner of the arena between the spike panels, Morpha will be unable to successfully grab him. Though the battle becomes more urgent as the second tentacle grows, the technique used to defeat Morpha remains the same: Link must continue to hook the nucleus and slash it repeatedly while it is bouncing about on land. After injuring Morpha's nucleus several times, the core bursts in a spray of water. The tentacle clings to life as long as it can by using up all of the water in the central pool, and by attempting to drain and escape through the ceiling. Once it absorbs all of the water in the pool, the tentacle culminates in a single water droplet on the ceiling and drops to the floor, splattering in all directions.

Link's rewards for his victory are a Heart Container and the Water Medallion from Ruto.[5]